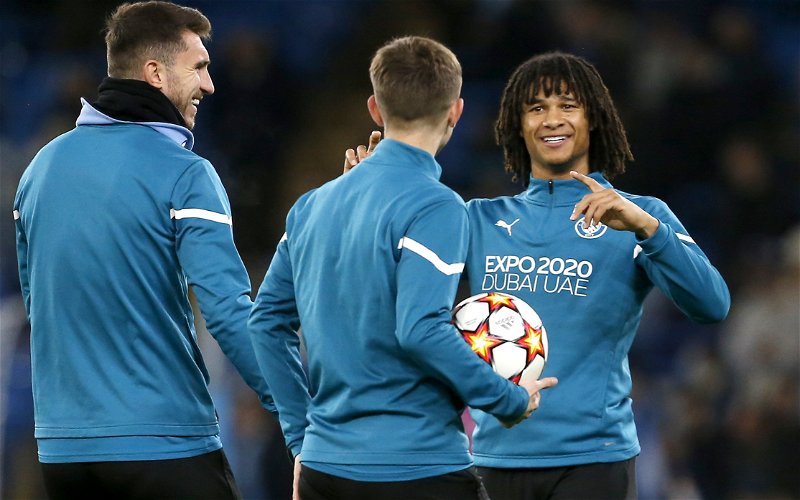 Eddie Howe could push for the loan signing of Manchester City defender Nathan Ake this January, according to Dean Jones.

Ake has already been linked with a move to St James’ Park given his lack of regular involvement with City and, presumably, his previous connection with Eddie Howe.

Indeed, the Dutchman played 121 times under the 43-year-old while at Bournemouth and even scored on 11 occasions over that period, highlighting the kind of attacking football and success from set-pieces the club had largely enjoyed prior to their relegation in 2020.

Clearly, that doesn’t necessarily mean Ake would instantly fit in this Newcastle team, but does provide a certain kind of logic as to the links.

What did Dean Jones say about Nathan Ake and Newcastle?

Speaking on the most recent episode of the Touchline Talk Podcast (14:44) Jones said: “Yeah, I have heard had that Nathan Ake one.

“It’s one that Eddie Howe is going to push for.

“Obviously, he’s not making all the decisions in terms of recruitment at this point at Newcastle and they’re going to have a team of people who decide these things but Ake is somebody he feels can fit in and might become available.”

What would Nathan Ake bring to Newcastle?

As far back as August, Chris Waugh of The Athletic spoke of the need for Newcastle to bring in a left-sided central defender with pace.

Ake, who is predominately left-footed, has the physical capacity to do exactly that considering he can also play at left-back and was reportedly targeted by City last year after having shown the pace to “shut out attackers”. Aside from that, the Dutch international also boasted a much higher pass completion rate (87.6%, via WhoScored) in his final season at Bournemouth than any of Jamaal Lascelles, Ciaran Clark and Federico Fernandez have managed this time around.

Obviously, merely having a higher completion rate doesn’t tell us much about the types of passes but FBREF data ranks him within Europe’s top 79% of defenders within the top five leagues for progressive passes (3.79) per game.

If Newcastle can sign him, it could answer a long-running issue in their backline.