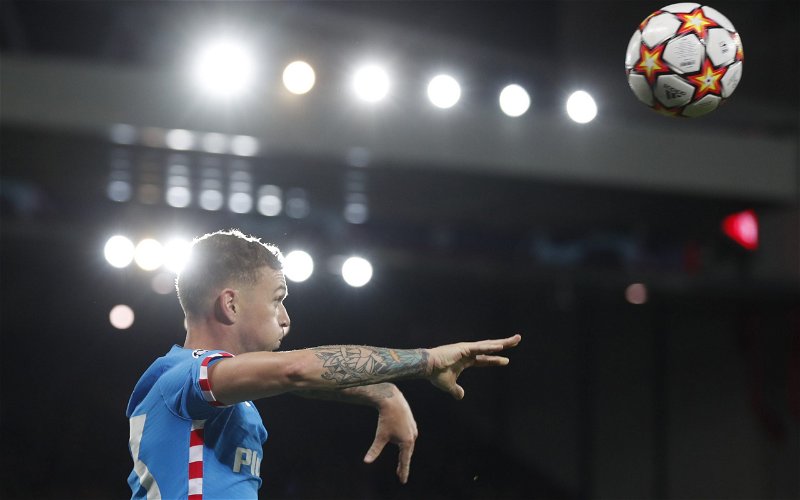 Newcastle United are confident they can tempt Kieran Trippier back to the Premier League in January, according to The Daily Mirror.

Eddie Howe is said to have earmarked the England international as a priority target ahead of his first window in charge of the club. Trippier, who has been linked with a move to Manchester United in recent months, could reportedly be tempted by a move back to England and, while the Old Trafford giants could revive their interest, Newcastle are thought to be making tentative moves.

One of the heroes of Atletico’s La Liga win last season, the 31-year-old ranks within the top 99% of all full-backs in Europe’s major five leagues over the past year for progressive passes per game (7.75, via FBREF) and the leading 81% for assists over the same period (0.15).

That kind of attacking quality would improve upon Jacob Murphy and Javier Manquillo and Trippier’s experience in the Premier League should be another factor to consider. Also able to operate at left-back (having done so a number of times for England manager Gareth Southgate), it would be a logical addition to come straight into the team during a relegation battle.

The only issue, however, is his age. According to Salary Sport, the former Tottenham defender earns in the region of £77k-per-week in the Spanish capital and, in order to leave one of Europe’s leading clubs for a relegation battle, would surely demand an increase.

Still, that is the problem Newcastle have got themselves into and perhaps overpaying – as grotesque as that may sound – is the only way to land big players at the moment.

What has Gareth Southgate said about Kieran Trippier?

Speaking after England’s Euro 2020 win over Croatia in June, Southgate praised Trippier as a “defensive animal”.

“People are still seeing the lad that was at Spurs a couple of years ago and not the defensive animal that has grown at Atlético Madrid, trusted by one of the best and most successful coaches in the world,” he said (via The Guardian).

“He gets his distances right on cover, he’s good one-v-one to stop crosses and his talking is really good. There was always going to be changes to our back four and we felt that communication and organisation was an important part.”