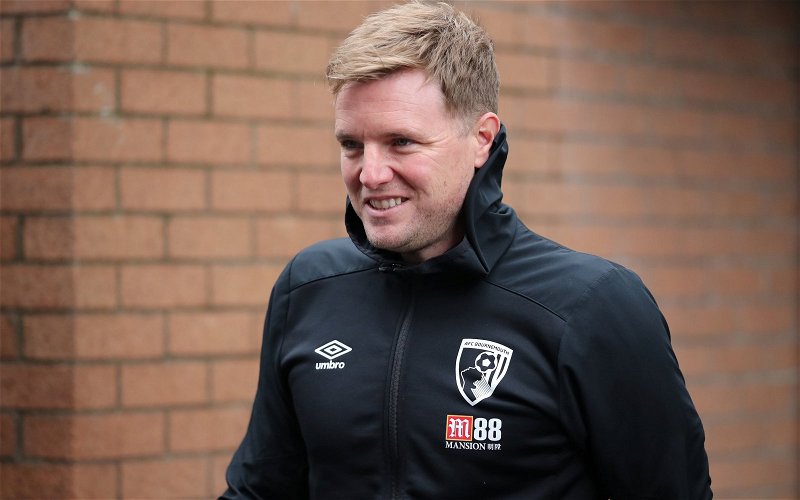 Mark Douglas of The Chronicle has shared an update on the appointment likely to follow Eddie Howe through the door at Newcastle United.

At the time of writing, Howe has not yet been confirmed as Steve Bruce’s permanent replacement, although everything seems to point towards him being appointed.

The former Bournemouth manager became a priority after Unai Emery confirmed he was staying at Villarreal and, according to The Athletic, Howe seriously impressed those who interviewed him with his long-term vision for the club.

Graeme Jones would appear likely to be in charge for the game away at Brighton and Hove Albion on Saturday evening, though Howe will surely be in for the international break.

What did Douglas say was coming next?

Taking to Twitter, Douglas revealed that a sporting director was ‘to come’.

Confirmation of Eddie Howe deal close now for #nufc. Think it has potential to be really good appointment based on some of the things I've heard about him and his approach. First job is to re-energise squad. Investment to come in January too.

The likes of Luis Campos and Michael Edwards have been linked with the role and The Daily Mirror recently reported that Newcastle had opened talks with Marc Overmars of Ajax.

Previously, Howe has worked under a sporting director at Bournemouth with former Scotland international midfielder Richard Hughes undertaking a similar role on the South Coast. Interestingly, it was Hughes who went cold on the prospect of moving to Celtic over the course of the summer during Howe’s talks with the Scottish giants.

Jones, meanwhile, is understood to have been assured of his position on the club’s coaching staff.

What has been said about Newcastle’s pursuit of a sporting director?

Speaking on Tuesday’s episode of The Transfer Window Podcast, Duncan Castles revealed that Amanda Staveley had been conducting interviews outside of the UK in an effort to keep the process under wraps.

“They are accelerating the process of appointing a manager and a sports director,” he said from the 58:10 mark onwards.

“[They are] Part of a radical overhaul of the club’s structure. Changes to the recruitment staff, I believe there’s going to be changes of the medical staff – substantial ones to those two.

“Amanda Staveley has been interviewing candidates for both roles in person in recent weeks. Some of those interviews have taken place outside the country and Newcastle are trying to keep this process as secret as possible.”