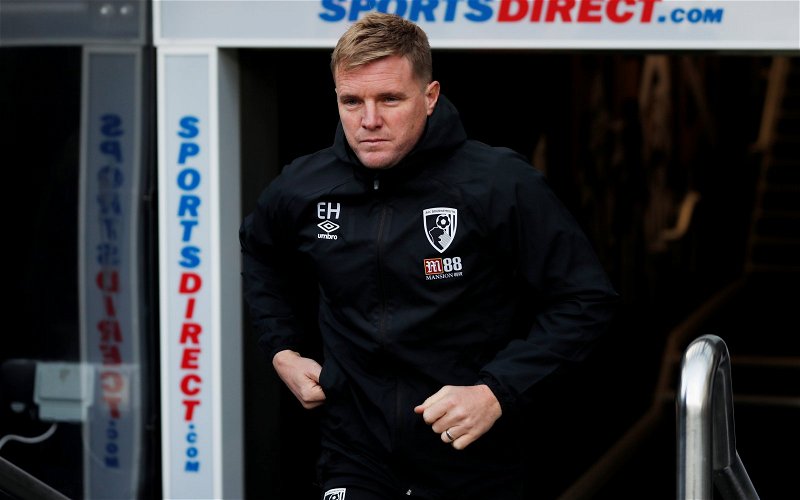 Newcastle United are now in talks with Eddie Howe ahead of a potential appointment, according to Football Insider.

While, yesterday, Unai Emery appeared to be ready to move to St James’ Park once he had finished Champions League duty with current club Villarreal, that deal now looks more complicated. Indeed, Spanish football expert Guillem Balague had suggested the former Arsenal manager was not convinced of the club’s project.

Now, there is reportedly a hope that Howe can be appointed after talks. Out of work since leaving Bournemouth after they were relegated in 2020, the 43-year-old is understood to be the preferred candidate.

Would Howe be a good appointment at Newcastle?

You’d have to imagine he’d offer some sort of improvement on either Steve Bruce or Graeme Jones.

Howe’s teams generally an eye-catching brand of football and he did manage to keep Bournemouth in the Premier League for five years after bringing them up from League One. While he may not be the kind of big-name many were expecting following the takeover, there is a certain logic in appointing him given his track record.

That doesn’t mean there’s no risk, however.

Though judging him on the relegation at Bournemouth is slightly unfair, Howe would be walking into a squad severely underfunded in so many areas and asking them to completely change their style during a relegation battle might be too much.

After all, during his last season on the South Coast, his team conceded 65 times. Considering Newcastle’s defence is already a mess – with only Norwich City conceding more often – he doesn’t particularly look like the kind of manager to come in and shut up shop in an effort to stave off relegation.

What has been said about Howe and Newcastle?

Writing on Wednesday morning, The Athletic’s Oliver Kay urged people to consider Howe’s reign at Bournemouth in a wider context than merely the relegation.