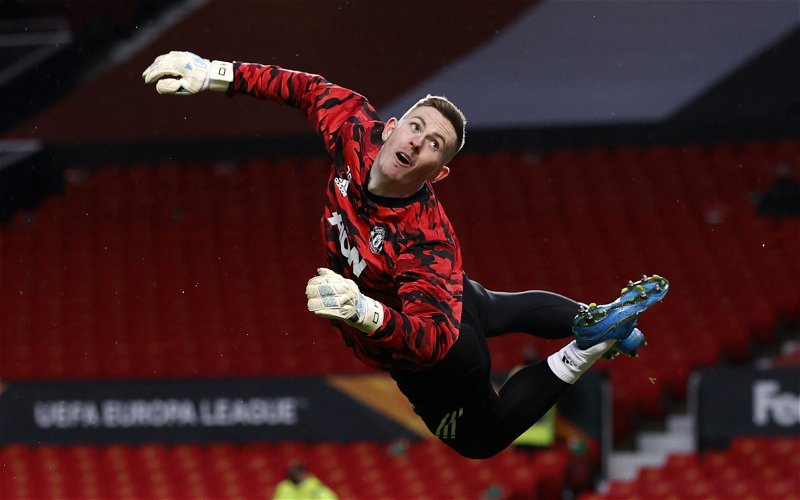 Dean Jones has revealed that Manchester United goalkeeper Dean Henderson could be set to leave the club in January amid links with a move to Newcastle United.

Henderson, who has once again fallen behind David De Gea in the pecking order in Manchester, has been linked with both Newcastle and Tottenham.

Though the Manchester giants were said to be reluctant to let him go mid-season, Jones hints at a change in the thinking behind the scenes.

What did Dean Jones say about Dean Henderson and Newcastle?

Speaking on Tuesday’s episode (from 12:24) of the Touchline Talk Podcast, Jones said: “I honestly think his door is open now, to offers.

“They’re kind of inviting anybody to come and speak to them. Agents have been told to go ahead with those talks and Man United have accepted a couple of weeks ago that Dean Henderson needs to be allowed to go out, initially on loan.

Why would Newcastle want to sign a new goalkeeper?

It seems long ago now that Karl Darlow was playing so well in the Premier League that there were calls for him to be included in the England squad. Indeed, the 31-year-old was at fault for Ivan Toney’s goal in the 3-3 draw with Brentford on Saturday and, according to FBREF data, has the 26th-worst post-shot expected goals rating in the division.

That metric judges how likely a ‘keeper is to save a shot based on the quality of the chance for the attacker and, while positive numbers indicate an above-average ability to do so, negative numbers suggest the opposite.

Tellingly, Darlow and Freddie Woodman’s numbers are -3.3 and -3.4 respectively, while Martin Dubravka cannot get a game, albeit has only recently returned from a lengthy injury.

Henderson, meanwhile, has never recorded negative numbers in his career. Clearly, it’s a relatively small sample sense but, given his distribution has also been praised, perhaps he could help Newcastle start to build from the back while proving more reliable between the posts.