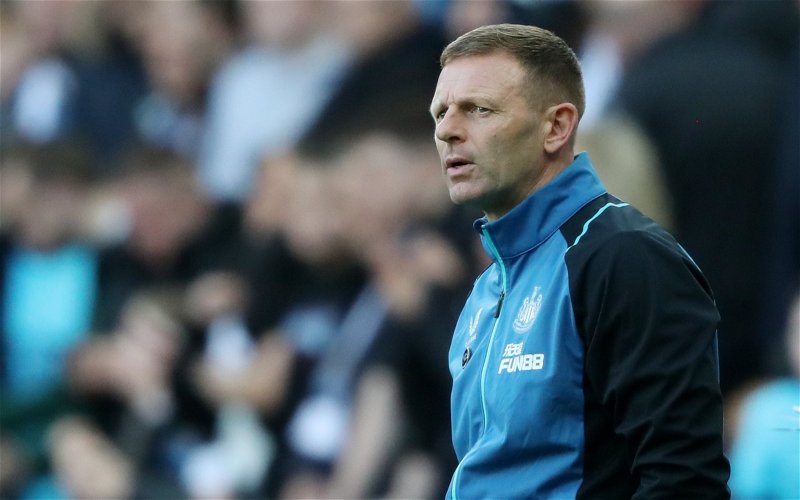 Graeme Jones has been assured of his position by the Newcastle owners, according to The Athletic.

With the managerial situation looking like somewhat of a mess at the moment given the fact Guillem Balague has recently claimed Unai Emery would likely snub Newcastle’s offer amid links with a move for Eddie Howe, the prospect of Jones remaining in charge for the Premier League game at Brighton on Saturday looks likely.

Clearly, the former Luton manager hasn’t overly impressed during his time in charge, although he has taken over a team in absolute disarray. Still, perhaps that was too much of an ask.

In terms of his future, the new regime are understood to have told Jones he has a place at the club, having been impressed with his attitude and his urge for them to find a new manager following the departure of Steve Bruce.

Is Jones popular amongst the Newcastle United squad?

Back in September, Craig Hope of The Daily Mail did reveal Jones was a popular figure amongst some of the players at St James’ Park.

Indeed, his arrival in January of this year was heralded by sources within the dressing room (via The Mail again) and Callum Wilson has previously spoken about him in glowing terms.

“I think Graeme Jones coming in as a coach (in January), definitely complemented the manager because he’s a little bit more tactically aware and up to date, whereas the manager has his different strengths and attributes,” he said (via The Athletic).

What has Jones said about a new manager coming in?

After the loss at home to Chelsea on Saturday, Jones was frank and honest in his assessment of the situation.

“I think it needs a fresh face,” he said (via The Chronicle).

“I think the fans were incredible today.

“It’s not a style of football the fans are accustomed to, we want to attack people, we want to score goals.

“But this is the stage we’re in.

“I haven’t spoken to the owners.

“We’ll see what they’ve got to say tonight or tomorrow.”