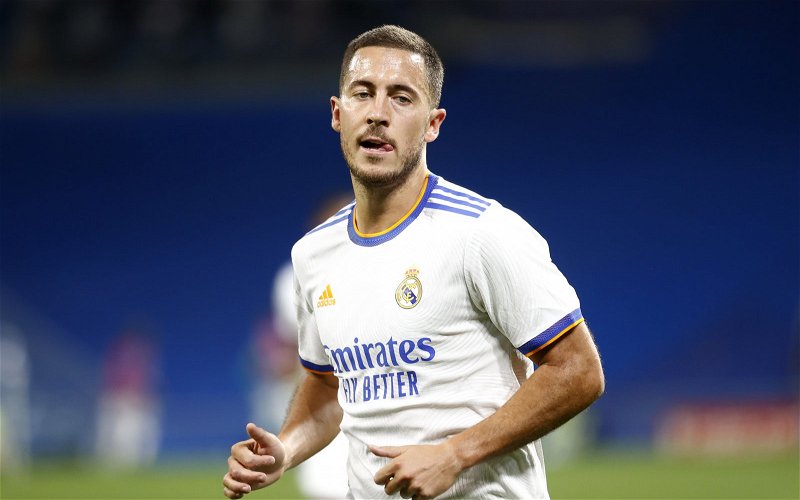 Newcastle United have been alerted to the possibility of signing Real Madrid forward Eden Hazard this January, according to ESPN.

Now that Newcastle can genuinely be considered one of the richest teams in world football, a number of names have naturally been linked. Indeed, following a lack of investment (to say the least) under former owner Mike Ashley, plenty of surgery on the squad is needed if the new regime are going to improve the club’s standing.

To that end, both Newcastle and Chelsea are said to have been alerted to the possibility of signing Hazard. One of the best players in England during his spell at Stamford Bridge between 2012 and 2019, the Belgian has struggled since his £100m move to the Spanish capital.

For their part, Madrid are understood to be looking to raise funds ahead of potential moves for the likes of Erling Haaland and Kylian Mbappe.

How many games has Hazard missed for Real Madrid?

While the notion of signing Hazard – considered by some to be one of the Premier League’s greatest ever foreign imports – a number of years ago would have been hugely exciting, the 30-year-old’s stock has dropped of late.

Since joining Madrid, the former Lille star has only mustered 52 appearances, during which he has scored 5 times and recorded a further nine assists amid a number of injury problems, as well as suggestions he has not looked after himself well off of the pitch.

According to Transfermarkt data, Hazard has missed 59 games at the Santiago Bernabeu alone and, frankly, has rarely looked at the level he was performing at with Chelsea.

For those reasons, he might be one to avoid. At 30 and failing to prove he can play consistently, the huge wages he would likely demand could surely be invested better elsewhere.

What has been said about Hazard recently?

After former club Chelsea knocked Madrid out of the Champions League at the semi-final stage in April, Hazard’s reaction – laughing alongside ex-teammates at Stamford Bridge – was fiercely criticised on Spanish TV show, El Chiringuito.

“A lot of people say he is the new Bale. Madrid have spent years waiting for him, negotiating for him, spent £100m on him,” said presenter Josep Pedrerol (via talkSPORT).

“They’ve just been eliminated, and it is possible for him to find something funny?

“After Zidane gave him the opportunity to play when he didn’t deserve it? He laughs at everyone?

“The situation with Hazard is very serious. Hazard cannot continue for one second more in Madrid.”