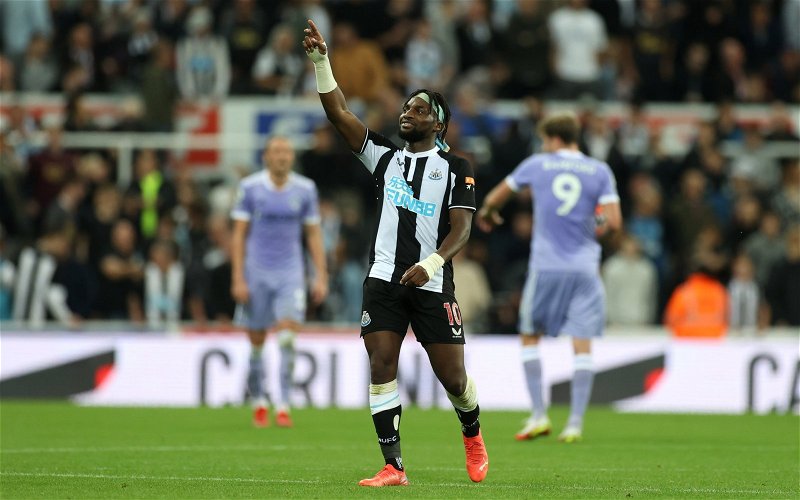 Allan Saint-Maximin has opened up on his relationship with Newcastle United manager Steve Bruce while speaking to Sky Sports.

After a miserable week in which reports have emerged suggesting there has been yet another bust-up behind the scenes, the pressure in on Bruce. While an entertaining draw with Leeds United may not have been a bad result last season, the fact they were without large portions of their first-choice defence, meant last night’s game was the latest disappointment.

According to the Daily Mail, some players have grown disillusioned under Bruce and his methods of management and, clearly, he remains a hugely unpopular figure amongst the fanbase.

What did Saint-Maximin say about Bruce?

Talking after the game, the Frenchman – once again Newcastle’s saviour – talked about his relationship with the manager.

“Steve Bruce gave me the chance to show my quality in the Premier League, in Newcastle.

“We have to stay together. We win together and we lose together, so we just have to keep going.”

Has Saint-Maximin been linked away?

Back in May, journalist Dean Jones revealed the 26-year-old would be open to offers.

“I think it’s logical that he’d probably look for a move,” he told Touchline Talk.

“I think that his style of play doesn’t suit a relegation battle and I don’t think he’s the type of player who wants to be at that level for too long.

“I do think that he’s probably got his eyes open if the right offer comes along.”

In truth, it’d be hard to blame the former Nice star. A hero for Newcastle fans, his entertaining style of play and increasing goal and assist return certainly make him an eye-catching talent and, frankly, this is a club seemingly going nowhere unless there’s a change of ownership.