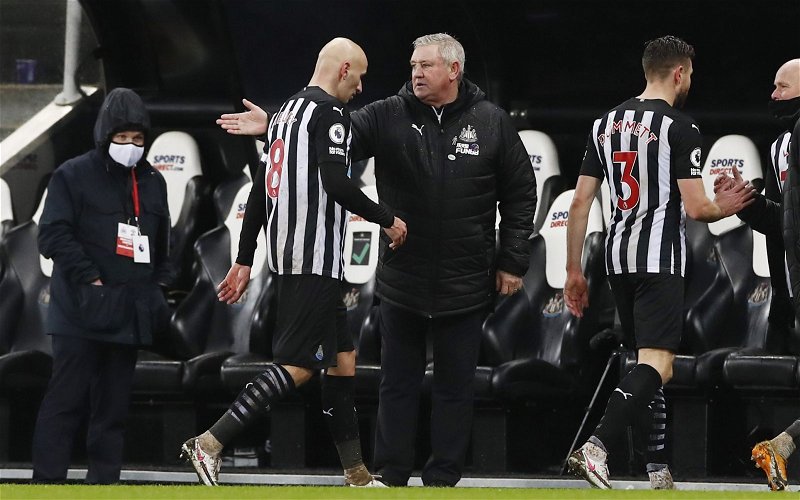 Jonjo Shelvey is facing a race against time in order to be for the start of the new season, according to The Chronicle.

The midfielder reportedly picked up an injury while training by himself over the course of the summer break, missing the recent loss to York City and remaining doubtful for Friday’s game with Doncaster Rovers.

What did Steve Bruce say about Shelvey’s injury?

While the 29-year-old was in attendance for the game with York, Bruce admitted the player was injured.

“Jonjo hurt himself before pre-season doing running on his own,” he said.

“He hurt his calf so he’ll not be around for a while just yet.”

At the moment, the club look very light on the ground when it comes to options in midfield.

While there have been reports suggesting Joe Willock is close to returning to St James’ Park after a wonderfully successful loan stint during the second-half of last season, there has been little movement on other fronts amid links with the likes of Mario Lemina.

Isaac Hayden has been linked with a move away and Miguel Almiron’s participation in this summer’s Copa America has delayed his return for pre-season, leaving Bruce with a dearth of options centrally. Given the difficulty a post-pandemic market offers, as well as the fact Newcastle are likely to be working on a relatively modest budget, it seems as if the frustration will drag on somewhat.

How important is Shelvey to Newcastle?

Although sometimes a figure of frustration, Shelvey does largely perform a relatively important role for the team.

Playing in every minute of all but one of the 29 league games he started last season, the former Liverpool midfielder was the club’s best option from the middle of the park for key passes per game (1.2, via WhoScored) while his three assists proved the joint-second highest in the team.