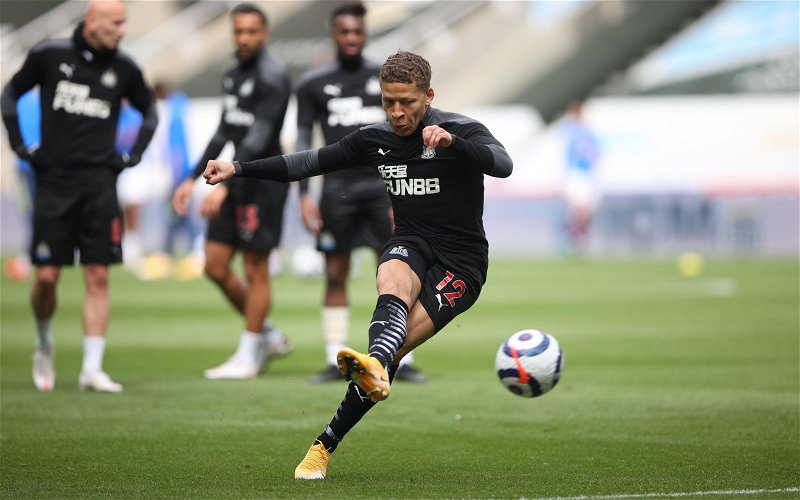 Back in March, The Athletic revealed the 31-year-old forward has signed a new three-year-deal at St James’ Park, though that has yet to be officially confirmed by the club.

Still, with money seemingly likely to be tight this summer, Mark Douglas recently suggested the former Crystal Palace striker could be one of the players sold in an effort to raise funds, so his future certainly looks up for debate as things stand.

Answering a Q&A, Ryder revealed that a verbal agreement may have been reached.

“I was told it had been verbally agreed or done in principle, that was a few weeks ago now,” he said (via The Chronicle).

“Gayle is on holiday and his family are settled here. I think he’s worth keeping but Newcastle need to a) play him from the start and b) get the service levels right and play to his strengths. Bruce and Gayle shared a very brief moment at the end of the game against Fulham but I don’t read too much into that.”

Often, he’s looked like the best source of his goals outside of Callum Wilson and, during the 2019/20 season, he finished as the club’s second top goalscorer in the Premier League.

Still, with Joelinton finishing his second season on Tyneside relatively strongly, perhaps Gayle could be sold if indeed he does have a new deal.

Given his prolific record at Championship level amid links with a move to West Bromwich Albion (via the print edition of May 30th’s Sunday Mirror, page 76), he could be a valuable sellable asset if finances really do get that tight.

Sadly, those are the difficult decisions the club may have to make.