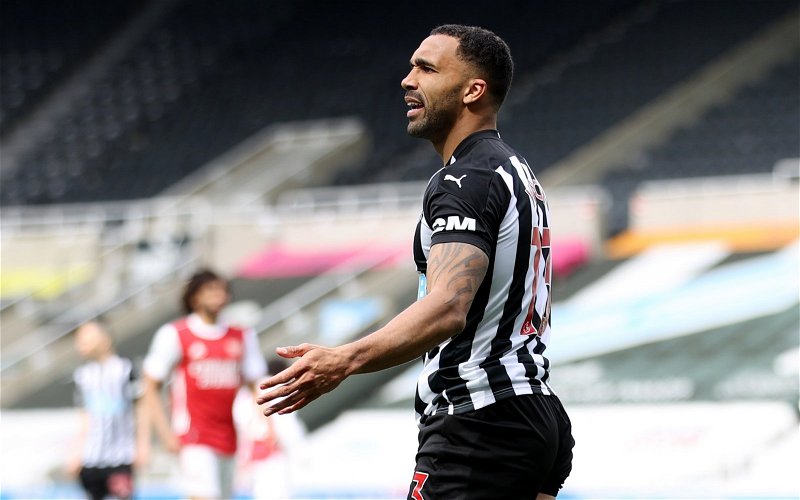 Callum Wilson will miss the end to Newcastle United’s season.

According to the club’s official website, the England international has picked up another hamstring injury and will sit out of the fixtures against Manchester City, Sheffield United and Fulham as a result. Strangely, the statement on NUFC.co.uk revealed the 29-year-old picked up the ailment in the dying embers of Friday’s night win over Leicester City, but he was not taken off despite the fact Miguel Almiron was in the 88th minute.

Indeed, he was reportedly (via The Athletic) assessed after the game and has been advised to watch the rest of the season from the sidelines.

Obviously, the fact the club cannot be relegated from the Premier League makes his absence a lot more palatable.

Still, Wilson has been one of Newcastle’s saving graces this season, with FBREF data indicating he has contributed towards 0.48 goal-creating actions per league game this season, with only Allan Saint-Maximin averaging more. Having scored 12 goals while registering a further five assists, the former Bournemouth man has directly contributed to 42.5% of Newcastle’s overall total (40) despite missing nine games this season.

Should Newcastle fans be worried?

Hopefully, the number of injuries Wilson has suffered during his Newcastle career can be put down to the nature of this congested season rather than any underlying problems.

Still, the fact is, he’ll have missed 31.5% of the league games this season as a result of hamstring issues, which doesn’t exactly fill you with confidence for a man close to turning 30.

At least now, he can use the summer to recover and hopefully feature far more regularly next time out.

What has Steve Bruce said about Wilson?

Back in April as Wilson ramped up his return from the injury he suffered in February, Steve Bruce spoke of how wary he was about unleashing the striker too quickly.

“I’m mindful of the fact that both of them [also including Saint-Maximin], they aren’t impact, they’re muscle injuries – a groin and a hamstring, which always you’ve got to box carefully with,” he said prior to the trip to Turf Moor (via BT Sport).

“But I’m also wary that we’ve only got six weeks of the season left, so I hope I make the right choice.”