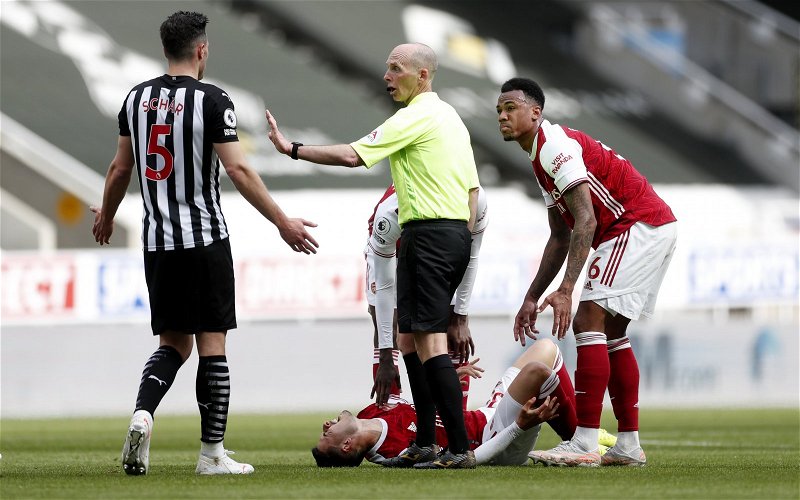 Speaking to Football Insider, former Premier League referee Keith Hackett has suggested Newcastle United defender Fabian Schar was unlucky to have been sent off against Arsenal on Sunday.

What happened with Schar against Arsenal?

Brought on in with only eighteen minutes to go during Sunday’s disappointing loss at St. James’ Park, the 29-year-old tackled Gabriel Martinelli from behind and was duly sent off by Mike Dean in the dying embers of the game.

That capped off a pretty dire afternoon for The Magpies, whose unbeaten run was ended and leaves Fulham with a chance – albeit a small one – of overtaking them with four games to play.

Indeed, Schar managed only 19 touches (via WhoScored) and was coming off a ten-game absence following the knee injury he picked up against Southampton in February, though he will now be unavailable until Steve Bruce takes his side to Craven Cottage on the final day of the season. For the player, it is far from ideal with Switzerland gearing up for the delayed European Championships this summer.

Still, Bruce did suggest the defender was unlucky to have been given his marching orders, telling The Chronicle: “the way it is at the moment and with the rules, there’s no tackles anymore. I don’t think it deserves a red.”

Interestingly, Schar had never been sent off in his career despite doubts from both Bruce and former boss Rafa Benitez (via The Athletic in July 2020) about his concentration.

What did Hackett say?

Much like Dermot Gallagher (who described the dismissal as ‘unlucky’ on his Sky Sports column yesterday), Hackett expressed his sympathy,

“I think that looking at it from an angle that’s different to the referee he actually could have issued a yellow card for a reckless challenge,” he said.

“He’s in a good position and did he get any screams? Was he influenced by the reaction of the player?

“It’s a red card and there’s no room of appeal by the club but on another occasion, he could have got away with a yellow.

“This was very late in the game as well. I think I would’ve issued a yellow card on the basis that the challenge is reckless without excessive force.”