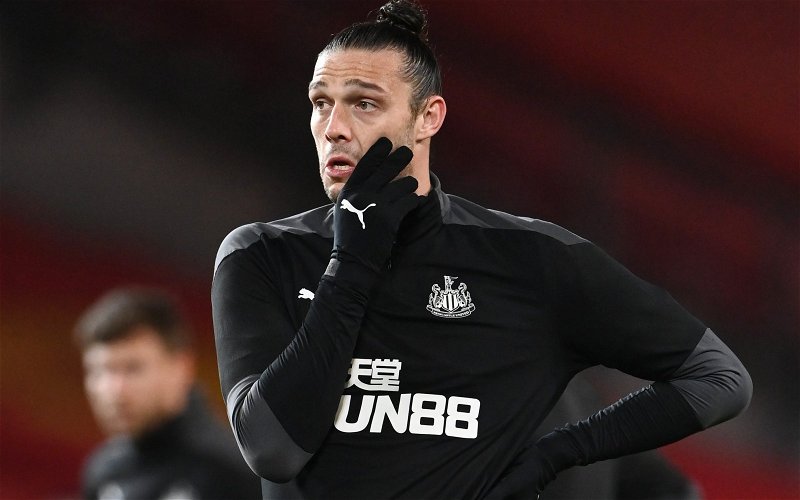 Newcastle United striker Andy Carroll has grown frustrated at his lack of playing time and will leave the club.

What is the latest Newcastle United transfer news?

The Times claim Carroll is unhappy with his role at the club and is ready to leave for pastures new upon the expiration of his contract this summer.

Indeed, these aren’t the first reports to have emerged suggesting the 32-year-old was feeling discontent, with The Chronicle claiming back in December that Carroll was frustrated about not being brought on against Leeds United at Elland Road, a team who were struggling to deal with any aerial threat from set-pieces at the time.

Out of contract soon anyway on a deal The Daily Mail claimed in June 2020 was worth around £20k-per-week with added incentives, his return to the club hasn’t exactly gone to plan, albeit surely not too much was expected given the number of injuries he’s suffered over the course of his career.

How many goals has Carroll scored for Newcastle?

Clearly, the Carroll we saw come back to St. James’ Park in the summer of 2019 was wholly different to the one who left in January 2011 for £35m but, sadly, even this incarnation of the player has struggled to convince.

While his overall contribution may be difficult to gauge (such as generally causing a problem in the opposition’s backline due to his physical frame, like winning a controversial penalty away at Tottenham earlier this season) the fact is, Carroll has scored only once in thirty-six Premier League games.

Again, it’s hard to suggest Newcastle wouldn’t miss a man capable of causing defenders problems with his physicality but those instances have been few and far between.

Generally speaking, Carroll hasn’t done enough to convince and perhaps his likely departure could open up space in the squad going forward.

In other news: Nothing But Newcastle understand the Magpies are all but certain to make a bid for a Norwegian international this summer…