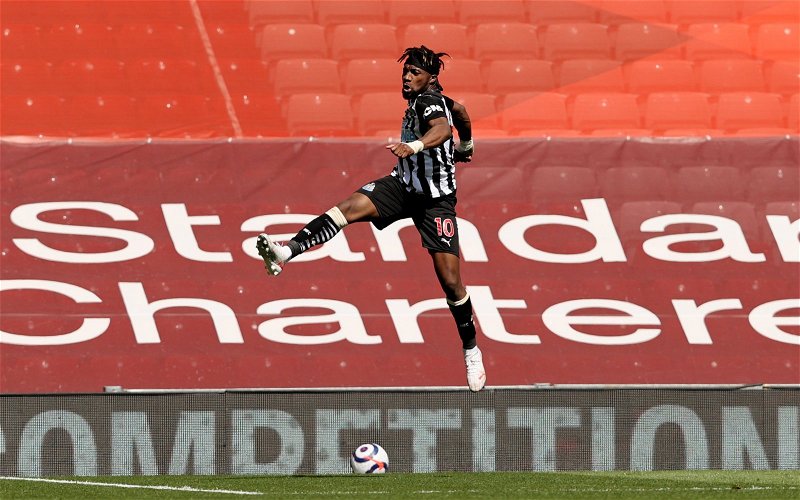 Newcastle United could struggle to hold on to Allan Saint-Maximin this summer, according to The Chronicle.

They quote Lee Ryder speaking on the Everything is Black And White Podcast, describing the battle to keep him at St. James’ Park over the course of the summer as a ‘challenge’.

“A few people have mentioned this already,” he said.

“The summer challenge will be if Newcastle can hold on to him.”

What are his contract details?

Thankfully, Newcastle are in a strong position here.

The 24-year-old only recently signed a new deal that keeps him under contract until the summer of 2026. Indeed, upon signing that deal in October, The Daily Mail revealed that the Frenchman was now in line with the club’s top earners, which SpotRac suggests is in the region of £80k-per-week.

Back in February 2020, the Mail also revealed that Wolves were keen on a move for him should Adama Traore leave the club.

Elsewhere, Le Sport 10 credited Arsenal with an interest in July of that year and it wouldn’t be a surprise if big clubs were increasingly keen on the player. After all, he’s been Newcastle’s saving grace this season – scoring three goals and laying on a further four assists. Indeed, according to WhoScored data, only Traore beats him for dribbles per game throughout the entirety of the Premier League and Saint-Maximin has produced far more in the way of end product this season, with Traore only having scored once and has registered only two assists.

Of the top ten dribblers in the division, only three players (Traore, Jack Grealish, Ademola Lookman and Sadio Mane) can beat the Toon star for key passes per game.

What has Saint-Maximin previously said about his future?

As quoted by The Sun in October, the winger did speak of how he wanted Newcastle to progress before committing his long-term future to the club.

“For my part, everything will depend on this development,” he said.

“If the club is developing well and it is in line with my desires, staying is a possibility.

“Afterwards, if things don’t turn out like that, obviously the question of leaving will arise.

“Being able to play in Europe and the Europa League would be really great. The Champions League is a big dream, every footballer wants to play it.”