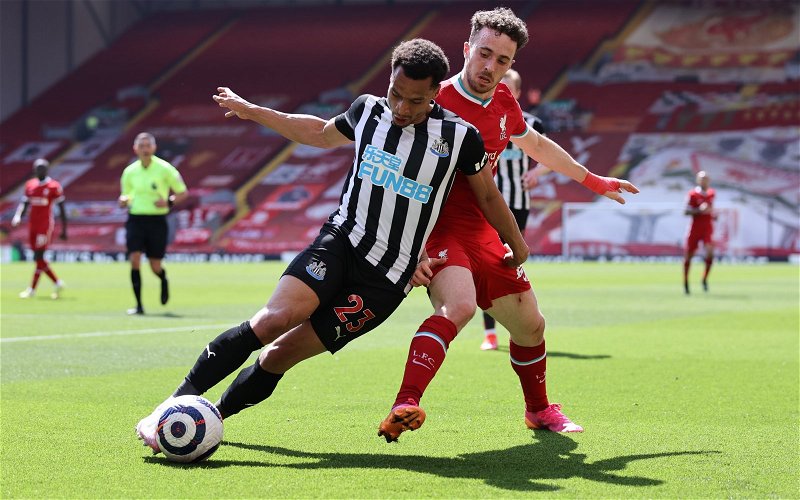 Newcastle United are headed for talks with Jacob Murphy over a new contract, according to Football Insider.

They claim that bosses at St. James’ Park are expected to line up discussions in order to put an end to transfer interest in the 26-year-old with Watford, Rangers and Southampton all said to be keen on a move.

The publication has also previously claimed that the former Norwich City man still has a year to go on his deal despite manager Steve Bruce telling BBC Newcastle he hoped the club would extend his contract as soon as possible.

Two goals and two assists this season may not sound like an awful lot but, in the context of Newcastle United, it certainly is. Indeed, his combined four goal contributions account for just over 12% of the club’s overall Premier League total (33) this season. Furthermore, he’s one of only seven players in the whole squad who average over a shot per game (1.2, the fourth-highest via WhoScored) and, considering Newcastle rank in the bottom four for shots taken a game, losing out on his impetus without a sufficient replacement would deprive them of a key attacking outlet.

Dribbling wise, only Allan Saint-Maximin can beat his game-by-game average of 1.6, so this has clearly been a player capable of helping drive the attack.

Having worked his way back into the side, Murphy deserves a new deal.

What has Noel Whelan said about Murphy?

“Murphy is a player with so much ability. He was brought to that club to run, be direct, use that pace and skill that he has with the ball at his feet and now he seems to be doing it,” he said.

“Murphy seems to be enjoying football again at Newcastle. The surroundings, the manager and the squad all seem to have made a nice connection. Newcastle seems a happier camp right now and Murphy is showing what a fantastic player he is.