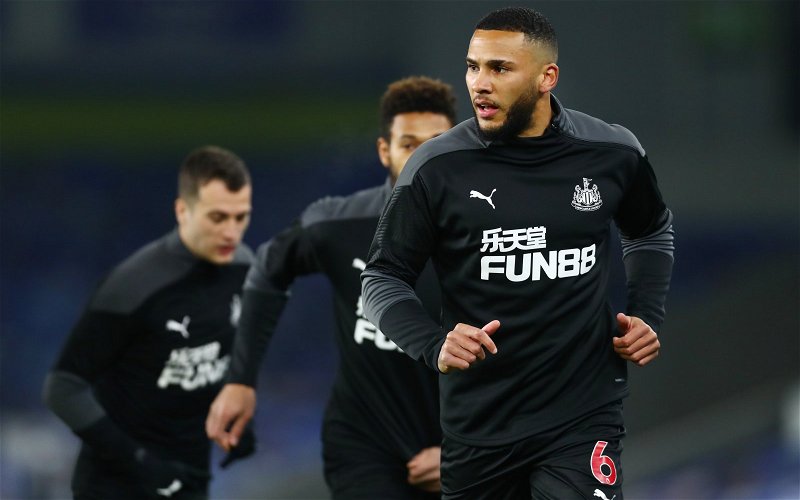 The bad news on the injury front continues for Newcastle United.

Just as Steve Bruce welcomed Miguel Almiron and Allan Saint-Maximin back into the side, Sky Sports report that Jamaal Lascelles has been ruled out of Sunday’s game with Burnley with a suspected stress fracture in his foot.

Indeed, speaking ahead of the weekend’s trip to Tur Moor, Bruce revealed the worst.

“The disappointing thing is we’ve lost the captain, Lascelles, with a foot injury which unfortunately happened last week against Spurs, so that’s a blow to us,” he said.

“With Fabian Schar missing too, it leaves us a bit light there.”

With Fabian Schar and Isaac Hayden also out injured, this is a real blow for Newcastle.

Indeed, according to WhoScored, Lascelles has averaged the third-highest number of successful aerial duels per game (2.5, the second-highest in central defence behind Ciaran Clark), as well as the second-highest number of clearances (4.4 behind Federico Fernandez). Also a palpable goal threat having scored twice this season (only two Newcastle players have managed more) he was a crucial figure during the last relegation run-in.

Though Rafa Benitez proved unable to keep the club in 2016, Lascelles emerged as his on-field leader and was soon made captain as a result of his stoic leadership.

Alarmingly, only Clark was included on the bench as a central defensive option in last weekend’s draw with Tottenham Hotspur, so Bruce is certainly light in that particular department.

Bruce did confirm that Fernandez had trained all week but he hasn’t played since January, leaving Newcastle short ahead of a huge game against a relegation rival. Both Emil Krafth and Paul Dummett were deployed in central defensive roles against Spurs, so perhaps one of them and Clark could man the backline should Fernandez not be risked.