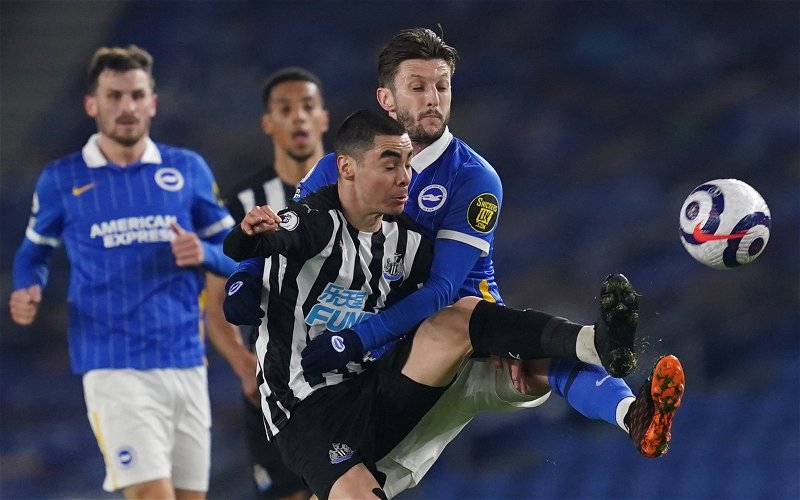 There is some unrest amongst Miguel Almiron’s camp in regards to a potential transfer away from Newcastle United.

Reacting to the latest comments from the player, The Chronicle’s Sean McCormick suggested that there is ‘clearly some unrest’ from his party.

Indeed, speaking to Pararaguyan radio ABC Cardinal (via The Chronicle) Almiron did admit he would like to play ‘in a team that fights more’ just a few months after his agent admitted Atletico Madrid were keen on a move for the 27-year-old.

While Almiron is under contract until 2024, previous reports from The Athletic have claimed that his agents have been frustrated that the former Atlanta man had not been offered fresh terms since joining the club amid Allan Saint-Maximin’s quick-fire new contract.

What has Steve Howey said about Almiron?

Speaking exclusively to Nothing But Newcastle back in February, former Toon star Steve Howey praised the South American forward for his ‘pace’ and his ‘engine’ but did admit Almiron must improve at ‘retaining the ball’.

On paper, Newcastle are in a healthy position to negotiate with anyone should interest in the player emerge this summer. With three years left on his deal, a Premier League side should have the resource to demand top dollar, particularly if big clubs in Europe start to get involved. However, that is of course entirely dependant on whether or not they can stay in the division this season.

In the event of relegation, there would surely have to be a firesale given there aren’t thought to be any relegation clauses in most of the players’ contracts as things stand.

Prior to his injury against Wolves last month, we had started to see the best of Almiron. Sadly, that might not be something we see long-term.