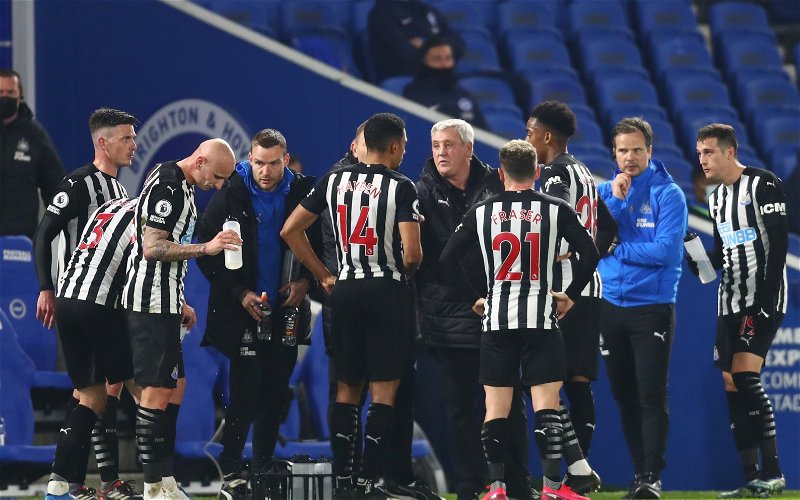 According to The Chronicle, some of the players believed Mike Ashley had opted to change manager after Bruce’s side were torn apart on the South Coast, a performance Lee Ryder described as ‘an insult to the club crest’.

There are said to have been 15 minutes of speculation but the club’s hierarchy are reported to have been told that Ashley would not be making a change.

Obviously, it’s hard to know exactly what the inner group of players were thinking at the time but there were suggestions from Ian McGarry on The Transfer Window Podcast last week that recently-departed Sheffield United boss Chris Wilder could come in so perhaps that came into the thinking.

The current state of play

Bruce has since been backed and, with nine games to go, it does seem unlikely there will be a change. Even at this point, it’d be hard to come in and make much of an impact, especially with the games coming thick and fast after the international break.

Once again, top brass at St. James’ Park have made life much more difficult for themselves than it needs to be.

Mark Douglas also of The Chronicle recently pointed out that they have had plenty of time to change manager, with the awful run of form the team are stuck in starting way back in December. Indeed, even Rafa Benitez couldn’t save Newcastle with ten games to go back in 2016 so it’s hard to suggest anyone else could do more with fewer games to play.

The only reasons to be positive are the returns from injury of Callum Wilson and Allan Saint-Maximin. If they can’t hit the ground running, it’s hard to see them being on Tyneside much longer.