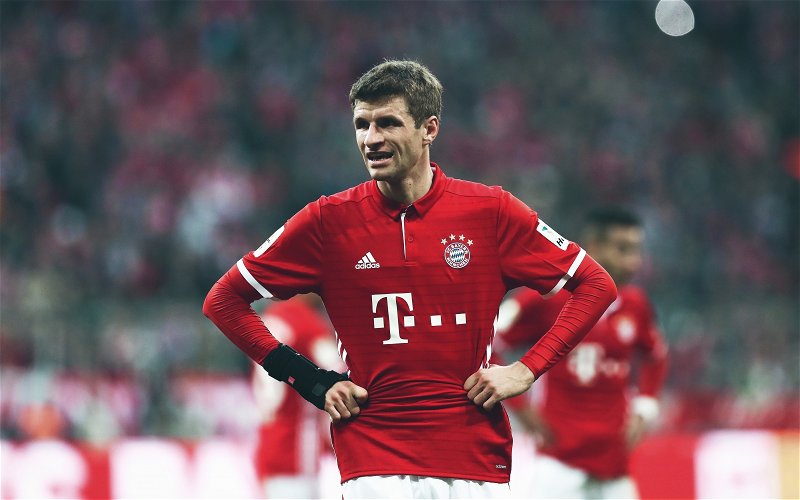 Bayern Munich playmaker Thomas Muller has issued a bizarre Newcastle namedrop in a wide-ranging interview with The Times.

Unfortunately for Newcastle fans, the raumdeuter was not going public with his desire to play in black and white – but did hint he might not necessarily remain a one-club player as he enters his seasoned footballing years.

“I’m not fixed to this club,” said the 31-year-old midfielder.

“I have a special relationship, I loved Bayern before I started playing for them, but when there’s a situation where you have to decide maybe to play for a different club, it would be no shame and no problem at all.”

Muller has previously expressed his enjoyment of English football and at his age, might find that a move sooner rather than later is the best chance of experiencing the Premier League, should he wish to move.

However, Germany’s most decorated player might struggle off the pitch more than on it in England – admitting his struggle with regional dialects, including the Geordie accent.

Asked about England and its culture, Muller said:

“I like it. But some cultures, speaking and such, special dialect, I don’t understand everything. Newcastle? Ah, I don’t know.”

Aside from a light-hearted reference to Newcastle’s famous accent, there is something to be said over a necessary adjustment to local culture that might ordinarily escape the minds of ordinary football fans.

Regardless of linguistic fluency or not, Muller’s Newcastle namedrop reminds of the need of patience and empathy with non-UK players settling into the Premier League in an all-too-human way.