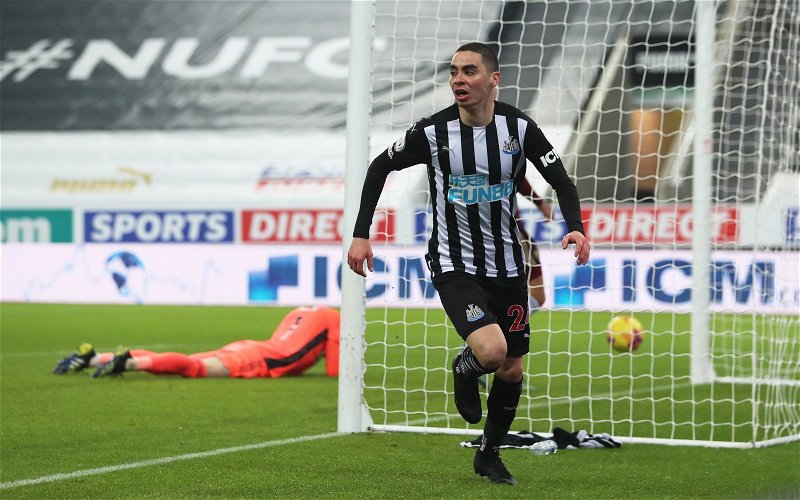 Positive news for Newcastle may feel few and far between, but the Magpies have been dealt an unlikely boost of immense importance in Newcastle’s survival bid.

Paraguyan playmaker Miguel Almiron could be in line for a Newcastle return sooner than expected.

Steve Bruce’s side makes the long trip from Tyneside all the way to the Sussex coast as they visit Brighton at the Amex Stadium in a real six-pointer for the Mags.

A win would take Newcastle to 31 points and if results elsewhere go their way, they could be five points clear of the relegation zone.

However, building breathing room with a Brighton win is no easy task and the Magpies will need to be at their best if they are to yield all three points from their fellow league strugglers.

Last time out at home, Brighton made their journey north count; three goals and three points later, Brighton had walked out of St. James’ Park having piled on misery for even the most optimistic of Newcastle fans.

Although Callum Wilson and Allan Saint-Maximin remain ruled out for the south coast clash, Bruce did issue optimistic praise on the hope that Almiron would be available:

Bruce, speaking to the BBC, said:

“We will see how they progress of course.

“It’s going to be a little too early for Callum, we can already dismiss that. Miggy is a different option.

“He is going along very, very nicely so we’ll keep our fingers crossed.”

Almiron’s return could be huge from a tactical standpoint.

Playing more centrally or even out wide could free up the likes of Ryan Fraser and Joe Willock to play in their natural positions – boosting Newcastle’s goal threat in the process.