Jacob Murphy’s performance vs Aston Villa cited as a highlight 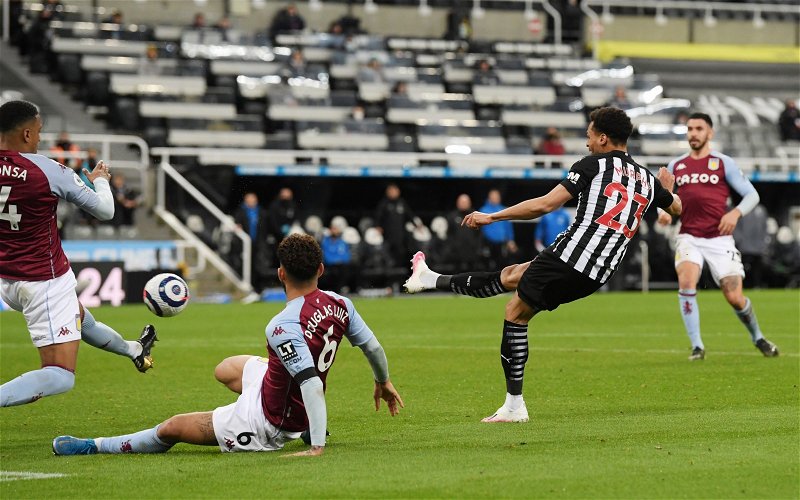 While Jamaal Lascelles’ late equaliser did at least earn Newcastle United a point, there wasn’t much to shout about once again during the 1-1 draw with Aston Villa.

Still, reacting to the game on Twitter, The Chronicle’s Mark Douglas did point out a slight positive.

Indeed, Douglas cited Jacob Murphy’s cameo as a highlight and, based off of his statistics, it’s easy to see why.

According to WhoScored data, the 26-year-old made the joint-highest number of key passes (2) despite only coming on in the 78th minute, while only Joe Willock and Joelinton made more than his two successful dribbles. Given he also hit the bar and delivered the second-highest number of accurate crosses (1) and it’s clear to see his impact was noteworthy.

Well, with Newcastle struggling for goals, having an attacking outlet who can at least help the likes of Dwight Gayle, Ryan Fraser and Joelinton could help Steve Bruce navigate through a difficult period during which he can’t call on three of his best players.

Without Allan Saint-Maxmin, Miguel Almiron and Callum Wilson until April, Bruce needs all the help he can get considering the firepower he has lost.

What does the future hold?

Murphy – valued at £3.15m by Transfermarkt – is out of contract at the end of the season but Bruce did make the decision to bring him back into the first-team set-up after spells out on loan following impressive performances earlier in the campaign.

If he can play a part in helping his side beat the drop and build on what has been his best campaign as a Toon player, a new contract should be offered. Clearly someone who can come off the bench and help carry some of the attacking burden, he could go some way into repaying the £12m fee Rafa Benitez paid for him back in 2017.

There’s a chance Murphy could leave St. James’ Park this summer amid links with the likes of Rangers. However, given what we saw last night, letting him go might be a mistake.