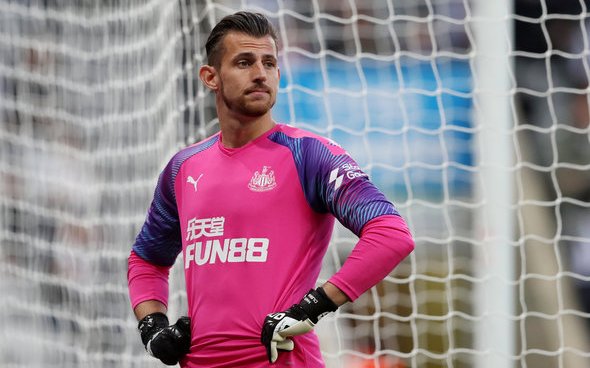 Three Newcastle internationals were on duty yesterday: Martin Dubravka for Slovakia and both Ciaran Clark and Jeff Hendrick for Ireland.

However, the Slovakian offensive unit did not repay the excellent defending of the back line supporting Dubravka and the ‘keeper himself.

Slovakia saw out a stalemate in a 0-0 result that ensured points were shared between the two nations.

It was an even less magnanimous result for the Irish Newcastle duo, who saw ex-Magpies hitman Aleksander Mitrovic of Fulham come back to haunt two of his former club’s stalwarts.

With Ireland having scored their first goal in seven games, Clark was partially to blame as a lost aerial challenge enabled Serbia to equalise just before half time, before Mitrovic shrugged off a weak challenge from Clark for another goal.

Indeed, Clark was hauled off on 79 minutes shortly after Serbia’s third goal. As for Hendrick, he was confined to the bench ahead of Championship players in Preston’s Irish duo Alan Browne and Jayson Molumby.

Nothing spectacular was truly exhibited by the Newcastle personnel in action.

Admittedly, Dubravka did well to keep a clean sheet in a confirmation of his goalkeeping prowess, with Cyprus having four shots on target.

However, FIFA rankings for UEFA nations sees Slovakia outrank Cyprus (29th v 87th) – and such sturdiness is to expected.

As for the Irish Magpies, they did little to help their team in a sordid affair for all concerned.