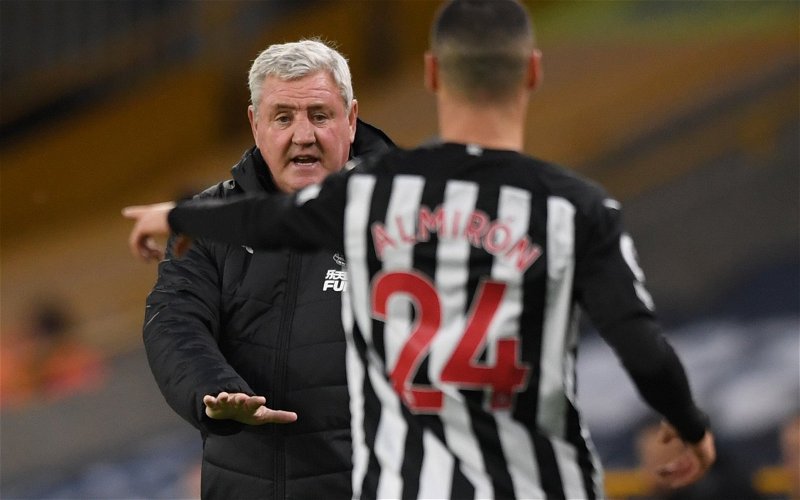 Speaking to ABC Cardinal recently, the 27-year-old revealed he would like to play for a side who ‘fight more’ only weeks after The Athletic revealed his camp were frustrated about the fact he hasn’t been offered fresh terms since joining the club in January 2019.

According to Football Insider, several players have been left raging at those comments and believe the former Atlanta man is trying to distance himself from the side’s awful form while attempting to drum up a potential move away.

Should we blame them?

It’s never nice to hear a key player talk about wanting to leave but, frankly, it’d be hard to blame Almiron if he does.

This is a club referred to as a ‘hollow shell’ by Alan Shearer run by a man who shows little interest in actually developing anything substantial at St. James’ Park. Indeed, even Steve Bruce has admitted his job is just to keep the team in the Premier League, so why would ambitious players want to stay?

There have rarely been any question marks about Almiron’s work rate. In fact, he was even praised by Bruce earlier this season amid the fallout from his agent’s original comments about potentially leaving, suggesting this isn’t a player who is merely throwing in the towel but a case of a player not feeling as if he can fulfill his ambitions on Tyneside.

What does is it all mean?

Once again, it hints at dressing room unrest.

Perhaps these comments weren’t particularly helpful but it only speaks to the kind of crisis the club are currently in. The likes of Karl Darlow and Matt Ritchie have reportedly fallen out with the manager and Bruce’s treatment of Matty Longstaff isn’t thought to have gone down well behind the scenes, making for some grim reading.

Sadly, Newcastle just look a real mess at the moment and, as painful as it is to write, it’d hard to blame players for suggesting they might want to try something new.