News: Miguel Almiron could be fit for Brighton clash 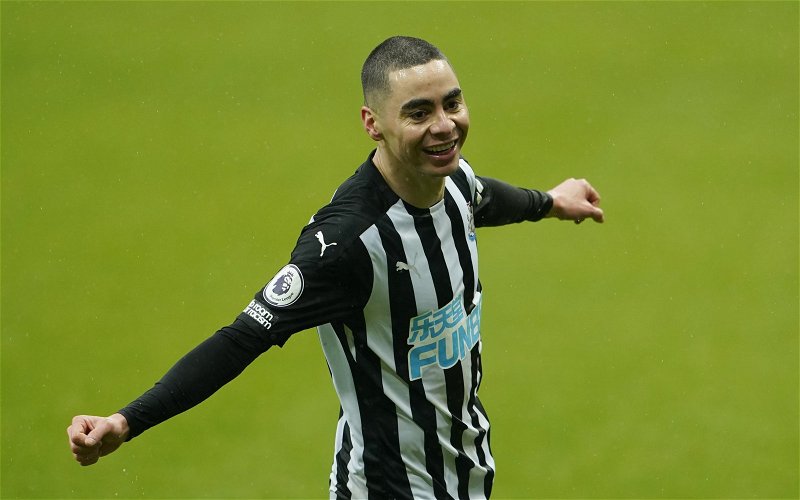 Quoted by The Chronicle ahead of tomorrow’s crunch trip to Brighton, manager Steve Bruce has revealed Miguel Almiron could come back into the side after recovering from the injury he picked up in the draw with Wolverhampton Wanderers last month.

“They [Almiron and Callum Wilson] are both back on the grass,” he said.

“We still think after the international break for Callum.

“We will see how Almiron is.”

While not exactly the most prolific attacking midfielder in the world, Almiron is the club’s second top scorer this season and was in fine fettle before limping off at St. James’ Park on the 27th of February.

Without Allan Saint-Maximin, he’s also Bruce’s best hope of hitting the home side on the counter. Given Graham Potter places emphasis on his team’s build-up play, it seems safe to assume Brighton will dominate the possession, currently averaging 53% of it when playing on home soil. With that in mind, and FBRef data showing the 27-year-old is Newcastle’s most progressive ball carrier who can play tomorrow (averaging 113.7 yards per game), at least there will be a danger that the away side can catch Potter’s team out.

After so much negative injury news of late, it’s really promising to see Almiron coming back.

If he can get at Brighton tomorrow and become the focal point of an attack missing Saint-Maximin and Wilson, his side could head into the international break in good spirits. Considering the problems without him, Almiron could really make himself a hero.