News: Dwight Gayle wanted by Galatasaray among others 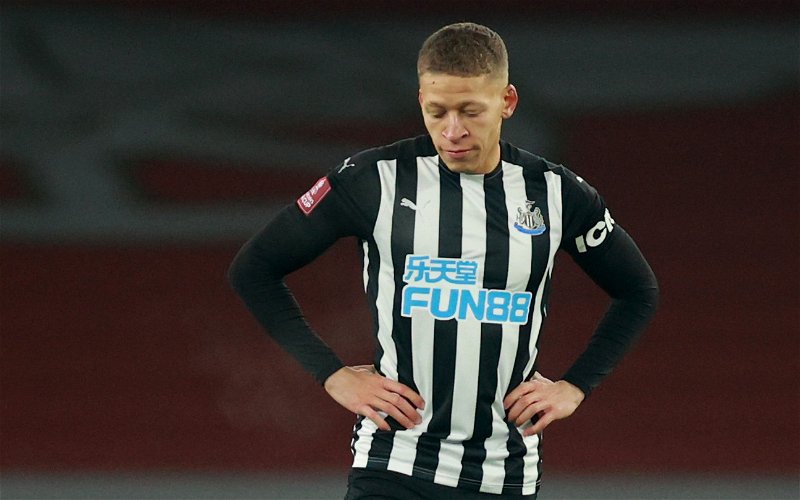 Dwight Gayle is attracting the interest of a number of ‘top clubs’ in Turkey.

According to the print edition of the Sunday Mirror (page 68), Istanbul giants Galatasaray are keen on a move for the 31-year-old as he enters the final few months of his contract at St. James’ Park.

Gala – who signed DeAndre Yedlin in the January transfer window – are believed to be among a number of big sides in the Super Lig who are interested in a move for the striker, along with clubs in Qatar and Saudi Arabia.

Would it be a blow?

Outside of Callum Wilson, Gayle has been Steve Bruce’s most reliable source of goals, scoring five times in 35 games under his watch. Granted, that might not sound like a lot, but in the context of this Newcastle side, it’s still more than Joelinton and Andy Carroll.

With the Magpies facing the very real threat of relegation this season too, Gayle is a proven goalscorer in the Championship. Indeed, the former Crystal Palace marksman has bagged 59 times in 100 games in the second tier and could be a great option to have in the squad should Bruce fail to keep his side up.

That’s not exactly the most ambitious view in the world but, given their current perilous position, it’s certainly worth thinking about.

Still, it’d be hard to blame Gayle if he did look for a lucrative move at this stage in his career.

The Athletic suggested earlier this month that the player is aware that his next contract will probably be his last big one considering his age and, while he’s said to be keen on staying at St. James’ Park amid tentative discussions over a new deal, it’s not as if he’s been playing regularly.

While injuries have been a problem for him this season, he’s only started two games and was played out of position against Aston Villa on Friday night, so perhaps he may feel it’s time for a change at the age of 31.

If he does, it’ll be Newcastle’s loss.