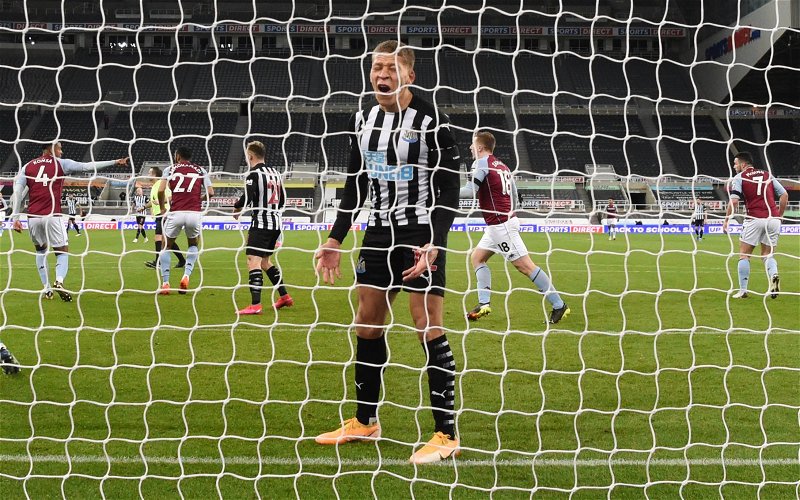 Alan Shearer admitted he is unsure whether or not Dwight Gayle is suitable to playing as a wide forward after watching him during Newcastle’s 1-1 draw with Aston Villa.

Steve Bruce’s decision to play the 31-year-old on the left and Ryan Fraser through the middle was the subject of debate considering his side did not have a shot on target in the first-half. Indeed, it did appear as if the two would have been suited to swapping over earlier in the match, given their experience in those roles.

Speaking on the tactical make-up of the side on BBC Radio 5 Live (via The Athletic) Shearer did suggest he doesn’t think Gayle is entirely capable of operating there.

“I thought Gayle would be played through the middle,” he said.

Given the lack of attacking impetus Bruce’s side showed at St. James’ Park last night, you’d have to say yes.

Not only has Gayle made 191 career appearances as a central striker (via Transfermarkt) he has also suffered with injuries pretty much all season, starting only his second game of the campaign last night. To expect him to shuttle up and down the flank in a relatively unfamiliar berth considering his fitness issues this season does seem strange, particularly when you have a natural winger in Fraser playing through the middle.

Another strange decision from Bruce which didn’t really pay off at all. With Gayle being Newcastle’s most reliable source of goals outside of Callum Wilson, the fact he was limited to only two shots (via WhoScored) was a problem given the club’s league position.

In dire need of goals, playing Gayle out of position wasn’t exactly conducive to getting the best out of him.