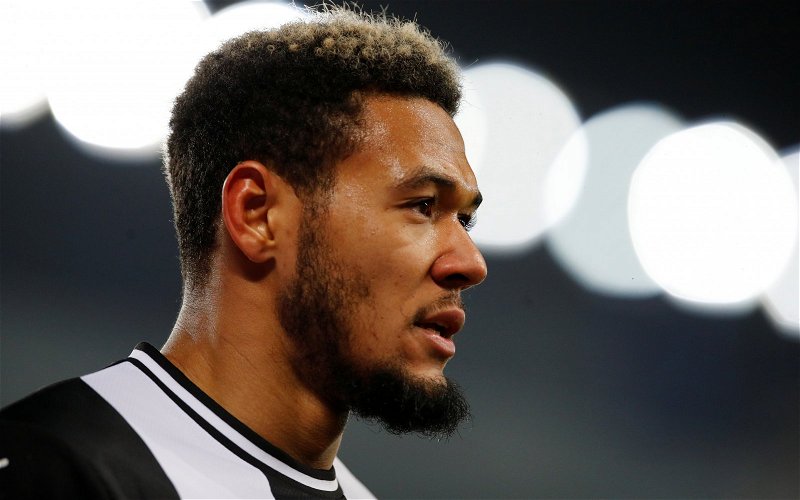 Newcastle fans may have been treated to Joelinton’s best performance in black and white against Aston Villa.

That is the case in the view of Jermaine Jenas as he spoke on the BBC’s Match of the Day, though the pundit also claimed that Joelinton’s inability to meaningfully threaten the Villa goal was a key factor that exacerbated Newcastle’s present woes.

When his £40 million price tag is factored in, the striker has averaged a cost of £13.33 million per goal in what represents contemptuous value for money from the hitman.

However, his overall work rate was subject to praise from Jenas:

“I think there were times in the game where Newcastle played really well,” Jenas told Match of the Day [via The Chronicle].

“Joelinton potentially had his best game in a Newcastle shirt but it all seemed to fall apart once they got in that 18 yard box.

“Even into the final third, some of the decision making at times…

“Dwight Gayle and Fraser have got to get closer into positions where they can score goals. Joelinton doesn’t get his shot off in the first half.

“These are the situations Steve Bruce is talking about.

“We know Joelinton isn’t a true centre-forward and these situations explain that. Just shoot there and anything can happen.

“It was a negative pass. In a weird way it was his best game in a Newcastle shirt and he gave Tyrone Mings a torrid time but it doesn’t really matter because he doesn’t score goals.”

Players like Joelinton simply have to step up if the Magpies are to avoid the dreaded drop into the Championship.

With fellow strugglers Brighton up next, a huge opportunity to cement Newcastle’s place in the league is on the horizon.

Without goals from the likes of Gayle, Fraser and Joelinton, Newcastle could be dismally barren in front of goal without other outlets such as top scorer Callum Wilson.