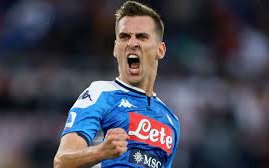 The latest reports coming out of Italy have revealed exactly why Newcastle failed to sign striker Arkadiusz Milik in the January window.

According to a claim made by Italian journalist Vincenzo Morabito (via CalcioNapoli24), Newcastle simply showed a lack of energy, tenacity and enthusiasm in their attempts to bring the Poland international to St. James’ Park.

According to Morabito, there was never a feasible chance of Milik making the switch from Napoli to Tyneside as a result.

The journalist claimed (as quoted by CalcioNapoli24):

“Milik to Newcastle? For Arek, the desire of the club was lacking.

“There was an offer of €20m, but Napoli at that moment considered his valuation higher, around €25-30m.”

It seems as though haggling over a few extra million pounds was a factor in causing hesitation over a deal for the prolific 27-year-old.

The marksman subsequently joined French giants Olympique Marseille, where he has already scored 3 goals in just 7 Ligue 1 appearances and scored on his only appearance in the Coupe de France.

He boasts a record of 15 goals for Poland in 56 caps, and has 114 goals and a further 34 assists in just 253 career appearances as a striker.

Given his overall prolific eye for goal and a natural instinct for the net that is already seeing him making waves at his new French club, Newcastle fans will be surely rolling their eyes at such a missed opportunity.

It seems a tightness, wilfully, of the Magpies’ purse strings has cost them the chance to sign a strong asset cheaply.