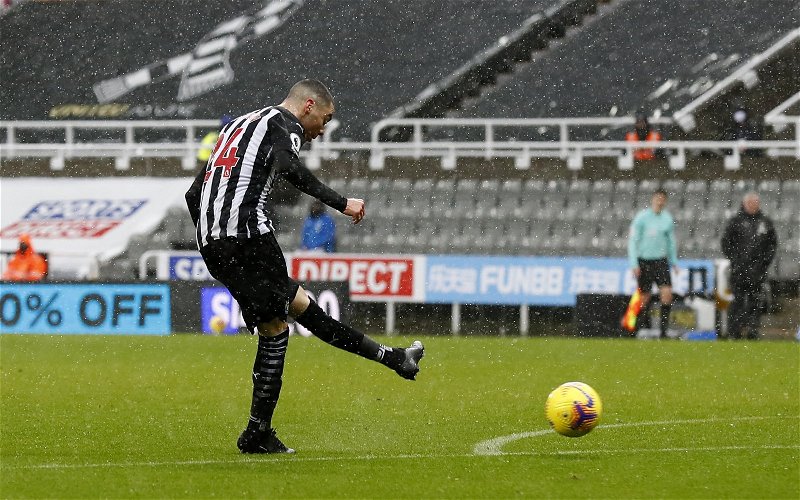 Exactly how Newcastle United deal with Callum Wilson’s injury is likely to define whether or not they are dragged into a relegation battle.

With the club’s top scorer out of action for up to two months, Steve Bruce and his coaching staff have the unenviable task of replacing a player to have scored 40% of their goals. Given none of the other three strikers scored more than four goals last season, that does look to be a daunting task.

Speaking on the matter, Steve Howey has mooted the idea of a positional change for another Newcastle attacker in order to cover for Wilson’s ailment.

When asked about whether or not he could see Miguel Almiron operate as a central striker, Howey surmised that the Paraguayan could do a job in that berth.

“Yes, he’s got that pace and the engine”, the former Toon star said in an exclusive interview with Nothing But Newcastle.

“When Newcastle haven’t got the ball he can drop back.

“He’s got to get better at retaining the ball but he is sharp, he can get up.”

Almiron certainly has shown an ability to finish of late, bagging twice against Southampton, which surely makes him a more prolific choice than either Joelinton or Andy Carroll. As Mark Thompson of Twenty3 recently pointed out, part of the team’s recent resurgence has been their ability to flip between a 4-4-2 diamond shape defensively and a 3-4-3 system when in possession, with Wilson, Allan Saint-Maximin and Javi Maquillo forming a three-man frontline.

Given Carroll’s lack of pace and the fact Joelinton has been criticised for not thinking like a striker, Almiron could be a better option through the middle.

Having recently told Paraguayan outlet Versus he enjoyed playing further forward, the 27-year-old certainly proven his worth in that department.

It would be a shame to move positions again (Transfermarkt note he’s played in five already this season) but, should Dwight Gayle not be able to convince, it might be a case of ‘need-must’.

While Newcastle do have the comfort of a sizeable gap between them and the bottom three, they have lost their most regular and reliable source of goals. In fact, Wilson’s goals have accounted for 17 of the team’s 25 points thus far, so it stands to reason that the rest of the team could suffer if he’s not replaced properly.

With that in mind, perhaps it makes sense to tweak’s Almiron’s role again.