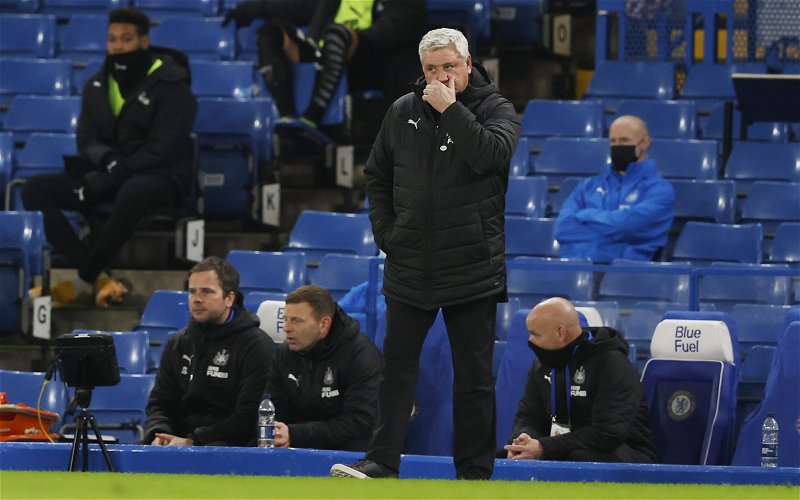 Steve Bruce is under no immediate pressure in terms of potentially losing his job.

According to The Chronicle, Mike Ashley is happy to see how the Newcastle United manager continues to gel with Graeme Jones as things stand.

While he is said to have the goodwill of the Sports Direct mogul, things could change if a realistic threat of relegation emerges. Still, managing director Lee Charnley is thought to have seen signs of encouragement following recent wins over Everton and Southampton and has reportedly relayed them at boardroom level.

Indeed, there is also thought to be a degree of sympathy offered to Bruce because of recent injuries to the likes of Javi Manquillo, Callum Wilson and Fabian Schar.

The manner of the loss to Chelsea was undoubtedly disappointing but there have been some green shoots of recovery of late. The win over Southampton saw Newcastle score three first-half goals at home in the Premier League for the first time in five years, while the victory away at Everton was a major scalp given their lofty position in the table.

Whether that’s down to Bruce or Jones is unclear but, either way, there are at least some reasons to be positive. That does not mean Bruce is the right man for the long (or even medium) term but Newcastle have to stay confident heading into the business end of the campaign.

Still, should things sour from here without Wilson (among others) then Ashley must learn from the Steve McClaren debacle in 2016. Sacked too late to give his replacement much of a chance to leading the team to safety, the delay ultimately cost Newcastle a season of Premier League football.

If they adopt that approach again, goodness knows what that means for the potential takeover.