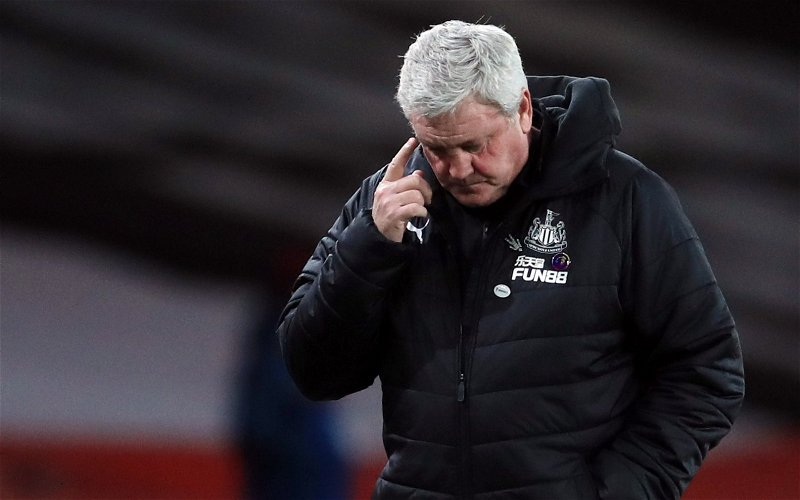 Speaking on Sky Sports, Keith Downie has delivered a fairly miserable update in regards to Newcastle United’s hopes to strengthen during the January transfer window.

In the clip relayed by Football Daily and posted by @NUFC360, Downie revealed that, while both Brandon Williams and Hamza Choudhury are loan targets, it looks like an increasingly difficult window.

Indeed, he claims Williams has interest from the likes of Southampton and Bayer Leverkusen and that Steve Bruce will have to ‘fend off’ competition in order to bring in Choudhury.

Seemingly confirming what The Northern Echo reported back in November, Downie also revealed the Newcastle boss would ‘not have any money’ to spend.

It says a lot when the mood music around a team currently seven points above the relegation zone is so bleak.

Indeed, Newcastle do appear to be in free fall at the moment and the 3-0 loss away at Arsenal would have done little to improve the mood. After promising to finally do it his way, Bruce’s side failed to convince once again.

Of the two players mentioned, Choudhury should be prioritised. That’s not to say the left-back berth couldn’t be upgraded but last night at the Emirates showed the struggles of Jonjo Shelvey, who failed to make either a tackle or an interception (via WhoScored) from his central midfield berth.

While the sample size is smaller for Choudhury given his lack of game time at Leicester, the 23-year-old has previously shown an ability to bring bite to the engine room, as Matt Ritchie found out.

Back in the 2018/19 season, the former England U21 international was averaging 2.7 tackles and 1.7 interceptions per game, which would see him rank first and second for those metrics in the Newcastle squad this season.

If nothing else, he looks capable of providing more of a shield.

With the lack of energy in midfield also something lamented by Chris Waugh of The Athletic this season, the need for Choudhury seems more pressing at the moment.