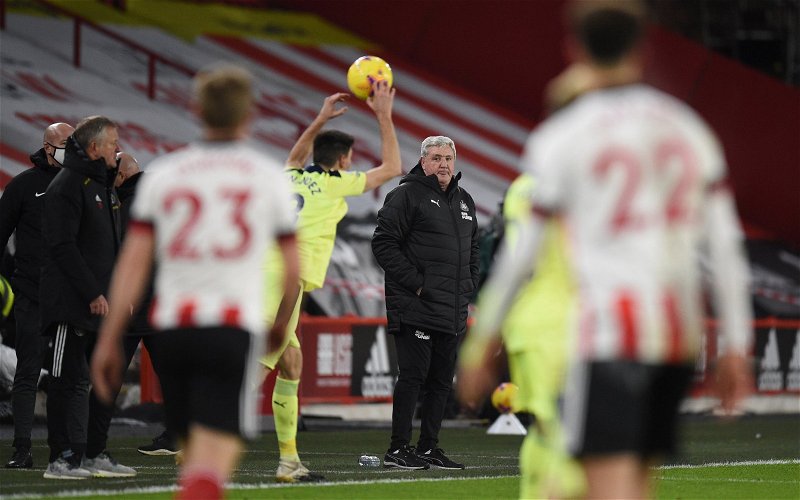 Indeed, the Newcastle manager has rarely proven popular amongst swathes of the support since arriving in 2019 and, with things looking bleak, fans have been calling for his head.

Still, answering a fan’s question on Twitter, The Sun’s Alan Nixon has put the current managerial situation into a rather useful analogy.

When asked whether or not Bruce was on ‘thin ice’ at St. James’ Park, Nixon described a situation plenty of supporters may fear.

If he was he would have fallen through https://t.co/tD44fAkrUv

Owner Mike Ashley has proven previously proven reluctant to sack managers, with the most extreme example coming during Steve McClaren’s reign in 2016, when a change was not made until March of that season. If Bruce was under pressure, it’d surely be difficult not to sack him after a game Lee Ryder described as an ‘insult to the club crest’.

As it stands, Newcastle are clear of the relegation zone even despite being without a win in eight, and Bruce himself admitted his remit was to keep the club in the Premier League.

A hugely frustrating situation for supporters but everything we’ve seen from Ashley would suggest a change is far from imminent.

The likes of Andrew Musgrove and Luke Edwards have also spoken of Ashley’s thoughts on Bruce and how difficult it is to imagine him leaving anytime soon even considering the miserable run of form the team have endured.

Sadly, it may just go on longer.