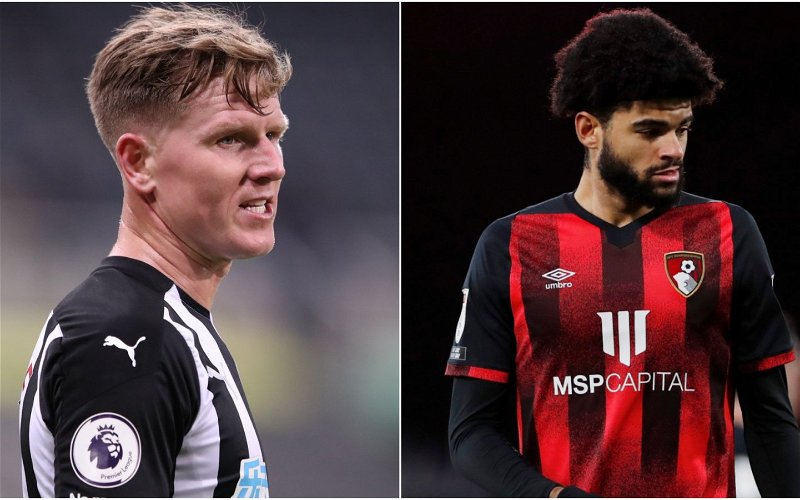 While Newcastle United aren’t alone in not having done any business on the incoming front during this transfer window, the fact they are yet to strengthen is an obvious concern given their awful run of form.

However, The Sun’s Alan Nixon has revealed at least some discussions are being held.

Answering a fan’s question on Twitter after reports in the paper broke about a potential move that would send Matt Ritchie back to Bournemouth in exchange for midfielder Philip Billing, Nixon confirmed ‘they’re talking’.

Still, he did warn that swap deals are particularly hard to do, especially given how few clubs appear to be spending money at the moment as football reels from the COVID-19 pandemic, so the switch does only appear to be a potential one at the moment.

Would it be a good deal?

Ritchie has been a wonderful servant to Newcastle but even a poor Jamal Lewis is getting ahead of him at the moment with Paul Dummett able to serve as back-up for the full-back. With that in mind, moving him on may free up some space and Billing does fit the profile of a player Newcastle need.

Indeed, the need for energy in the middle of the park has been something spoken about by the likes of Chris Waugh of The Athletic in recent months and, last season, Billing did produce some good numbers even despite the fact Bournemouth were relegated.

According to WhoScored, the Dane averaged 2.1 tackles and 1.9 interceptions per Premier League game, as well as one shot over the same period. Were he to translate that into this season’s Newcastle team, he’d rank joint-first and sixth respectively.

Isaac Hayden offers the same averages in the most defensive metrics and only Jonjo Shelvey offers more shots (by 0.2 per game) so the 26-year-old could, in theory, offer a more dynamic option in that he could help perform two roles at once.

Again in theory, that could then free up the likes of Shelvey to get on the ball or even offer someone like Miguel Almiron more freedom to roam were he to be deployed in a central berth.

Though not the most eye-catching transfer, Billing does look like he can offer more of a box-to-box presence.

Considering how poor the Newcastle midfield has been this season, any sort of reinforcement is surely welcome.

Frankly, if a deal can be done, Newcastle should explore this.