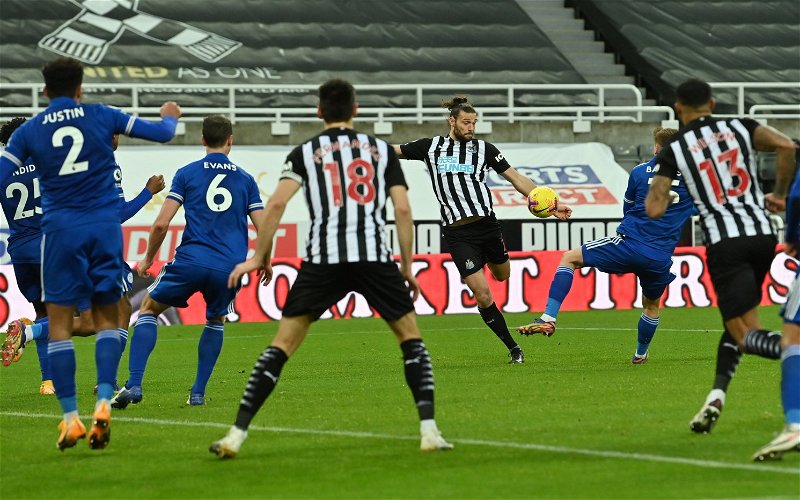 According to The Chronicle, Newcastle United aren’t willing to listen to loan offers for Andy Carroll this month.

They claim that manager Steve Bruce wants to keep the 32-year-old marksman despite apparent interest from West Bromwich Albion and has assured him he will get game-time. Indeed, Lee Ryder had suggested the forward was unhappy at not being brought on against Leeds United but it seems he is in Bruce’s plans.

Much like the situation with Dwight Gayle and Fulham we wrote about yesterday, strengthening a potential rival towards the bottom of the Premier League table in the Baggies would indeed be reckless.

Carroll may not have proven prolific since returning to the club in 2019 but did chip with four assists last season and scored his first Newcastle goal in 10 years in the recent loss to Leicester City.

Still capable of causing defenders problems in the air – much as he did against West Ham on the opening day before helping his side win a controversial penalty against Tottenham – he does provide an interesting alternative.

Whether or not Carroll will do enough to have his contract extended remains to be seen but, right now, letting him go in a side who struggle for goals as it is seems unwise, particularly to another team in the lower half.

Bruce has leaned on a 4-4-2 system seven times this season (via WhoScored) so there is a chance for either Carroll or Gayle to line-up alongside Callum Wilson fairly regularly and, while it may not be the most expansive brand of football, he does offer a lot in the way of being a target man.

According to FBRef, Karl Darlow’s goal-kicks reach the third-furthest distance per game in the Premier League (60.8 yards on average) and, with Carroll winning the most aerial duels of any Newcastle attacker this season (3.4 per game), he seems to have a natural use.