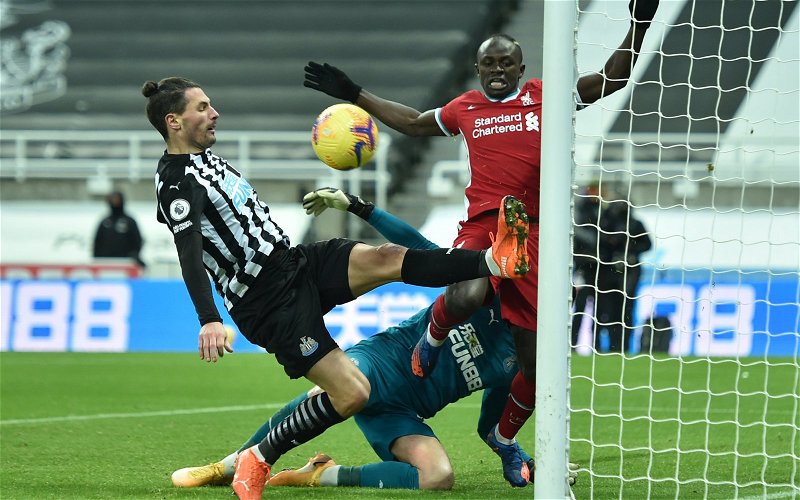 Though Karl Darlow and Fabian Schar were both needed to keep the champions out, a battling 0-0 draw with a side at the top of the league was a good result after a miserable period for the club.

Speaking after the game to Amazon Prime, Reds manager Jurgen Klopp name-checked the Swiss as someone who disrupted the visitors’ rhythm.

While conducting his post-match interview, Klopp suggested the 29-year-old had been looking to kill time by looking for treatment.

“Look it’s normal,” replied the German when asked whether or not he thought his side could have pushed for a late winner.

“Newcastle then went down, Schar had I don’t know how many moments where he thought he felt something.

“That’s fine but it breaks the rhythm.”

Obviously, it’s hard to quantify how much time a player spends on the floor but the answer is: probably.

That is just part of the game. As champions, Liverpool were surely always favourites last night and Newcastle did have to defend deep at times, so buying your team a breather seems like clever play.

However, it’s worth noting that Schar is only returning from a battle with coronavirus and did play 90 minutes against Manchester City only a few days ago, so it’s only fair to cut him some slack.

Even if he had ulterior motives in mind as Newcastle battled hard to claim a point, he’d certainly done his part. Indeed, his goal-line clearance to deny Sadio Mane was a thing of beauty and he lead the way with an overall tally of 12 of those.

Blocking two shots and making two interceptions too, it’s not if he’d only kept Liverpool at bay by wasting time.