Miguel Almiron’s outing the only positive after Brighton humiliation 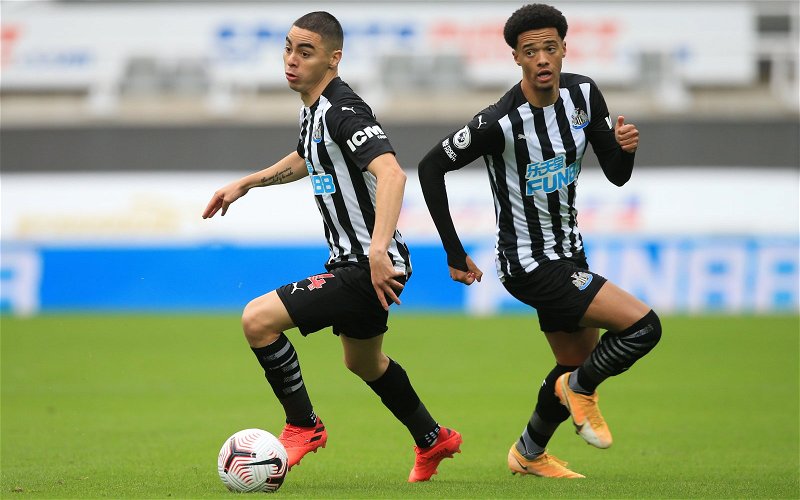 This article forms part of our new feature, The Performance of the Week, where Nothing But Newcastle will analyse one key performance from the weekend’s action.

Well, it’s fair to say Newcastle United were obliterated at home by Brighton and Hove Albion yesterday, putting an end to what had otherwise been a promising September. Two early goals from Neal Maupay saw the visitors put the Toon out of reach within the first seven minutes and, by the time Aaron Connolly bagged the third, the Magpies looked like a well-beaten side.

Obviously, given the manner of the result, moving to praise a player for his performance might be an odd thing to do. Indeed, it was a painful watch at times as Steve Bruce’s men failed to muster a shot on target at all but, amid such a lack of presence in the final third, Miguel Almiron did at least manage to outperform his teammates despite his half-time introduction.

Bruce opted to continue with the front two of Andy Carroll and Callum Wilson, citing the idea of dropping the former as ‘unfair’ following yesterday’s game, though it’s fair to say the 31-year-old failed to have the desired impact. In fact, as per WhoScored, the towering Geordie won just five aerial duels (7 fewer than he did against West Ham) and struggled to keep the ball, completing only 27.3% of his 11 passes.

So, a different approach was clearly needed at the interval and Almiron duly arrived to partner Wilson further up the field. While it’d be too much to suggest the Paraguayan (who was also benched against the Hammers on the opening day) changed the game given the eventual result, his ability to create was obvious. Just over 45 minutes of action yielded 3 key passes (the most out of any Newcastle player) and 2 accurate crosses from just 18 passes, completed at a percentage rate of 88.9% (the third highest in the side).

There is no doubt that Carroll proved effective against a West Ham side who could not handle him in the air, given the fact Angelo Ogbonna won just five of his duels off the ground. However, when you consider the fact Lewis Dunk and Adam Webster (2 each) went some way into at least matching him and also that Jonjo Shelvey was given little time to pull strings due to the Seagulls’ high press (they restricted him to just 1 key passes compared to 3 in East London), the target-man approach seemed somewhat redundant.

On a bleak day at St. James’ Park, Almiron provided a glimmer of hope.