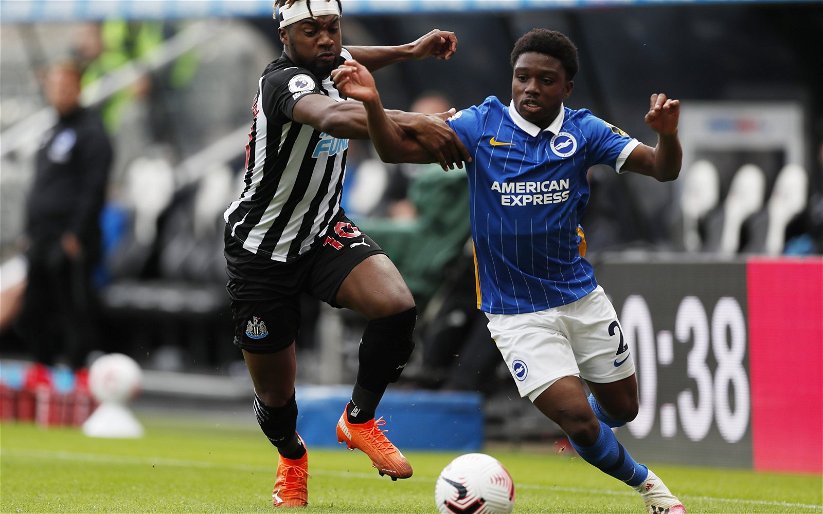 Statistically (per WhoScored), Javier Manquillo made more passes (39 to 20) at a much higher success rate (87.2% to 80%) than Tariq Lamptey, as well as completing more accurate long balls (2 to 1) and committing fewer fouls (0 to 2). But then again, statistically, Newcastle United stayed up reasonably comfortably last season.

Everything listed above is – factually – correct but here the lies the problem: it doesn’t tell the whole story, it requires a deeper look. Indeed, anyone watching Brighton (a fellow mid-table side last year) dismantle the Magpies at St. James’ Park could surely have seen the gulf in class between Graham Potter’s progressive outfit and the home side. Lamptey, who was described as ‘fun to watch’ by Potter following his performance in the loss against Chelsea on Monday night, tore the Toon apart early on as he forced Allan Saint-Maximin into giving away an early penalty before further forcing the Frenchman to swap sides as he struggled to deal with him.

Certainly, the term ‘fun to watch’ must be a somewhat alien concept for long-suffering Newcastle supporters. Last season, they scored just 20 goals at home and yesterday, despite the £20m addition of England international Callum Wilson, they failed to have a shot on target.

0 – Newcastle have failed to have a single shot on target in a @premierleague home game for the first time since December 2018 against Fulham. Bereft. pic.twitter.com/GLySwaBCBM

So, back to the analytics. Lamptey, who Louise Taylor of the Guardian described as being able to leave Newcastle defenders look as if their boots were laced together, didn’t complete a single cross. Now, for an attacking right-back and one who had attempted 3 and completed one (via WhoScored) against his former employers little under a week ago, you could perhaps have been forgiven for believing he was under-par. Of course, he wasn’t. Winning a penalty, forcing the opposition manger into an early tactical change, assisting the assist for Neal Maupay’s second and a last-ditch tackle to prevent Wilson from running through on goal were all moments not so easily quantified by stats. Or easily defended by the home side.

That kind of thinking should be taken into account when analysing just where Newcastle are right now. Figures can be misleading, after all. The 10 points between the Magpies and the drop zone last season look like a comfortable amount but the fact that they picked up just 18/42 points against sides lower than them last season suggest there is a real struggle to break through and take the game to opponents when not offered the chance to counter. When you further consider that Newcastle’s biggest scalps last season (Tottenham away, Manchester United at home and Chelsea at home) came with the side having just 19.8%, 31.9% and 30.1% possession respectively, their game plan looks rather obvious.

At times, it works and Bruce should be afforded respect for that but, without a clear tactical plan, there doesn’t appear to be much direction when countering isn’t as natural, as further explained by the Athletic, who also lamented their struggles to beat sides of similar stature at home. Perhaps Newcastle intended to suck Brighton onto them before hitting them on the counter but the kind of direction shown by Lamptey to win such an early penalty left the Toon without any. A goal behind within two minutes, they were way off course when the lead was doubled not long after. Late in the second-half, when Aaron Connolly extended his side’s advantage, they were lost without hope.

Numbers don’t tell the whole story, nuance must be applied to contextualise. Tariq Lamptey had a much better game than they’d have you believe and Steve Bruce’s Newcastle may not be as comfortable in mid-table.