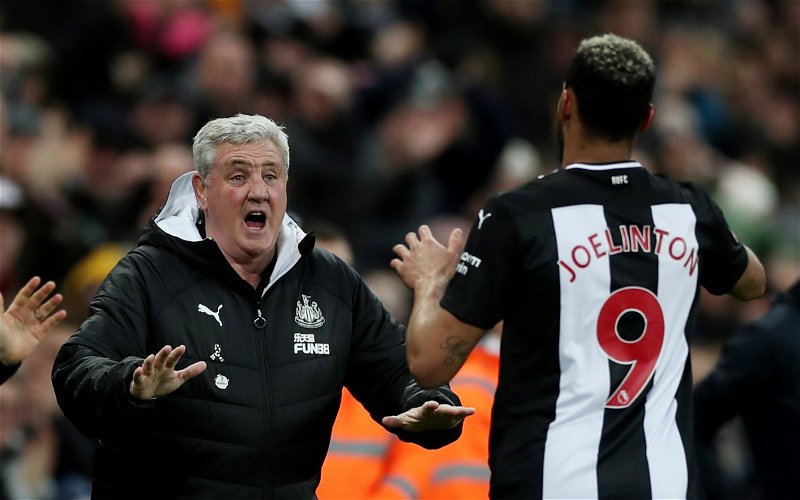 Ever since Newcastle United almost doubled their transfer record to acquire Joelinton from Hoffenheim for £40m last summer, goals have been the focus of many conversations on Tyneside.

Usually, this was in reference to a lack of strikes finding the back of the net with the stuttering signing scoring just twice in the top-flight, and perhaps more worryingly Jonjo Shelvey topping the charts for the Magpies on six goals. But the issue was more profound than that, and the lack of clinical edge was particularly noticeable when the Magpies scored just two in their last five Premier League matches before the break, as per WhoScored.

Although, since the resumption of the Premier League fans will have been delighted to witness a free-scoring attack who’ve now notched ten in their last four top-flight games, via WhoScored. This dramatic shift has come about courtesy of some Steve Bruce bravery, returning to the back four which saw Newcastle pummelled by Norwich City 3-1 at the start of the season. With their defensive frailties on the mend, the extra midfielder has allowed Newcastle to flourish further forward.

Miguel Almiron is no longer busting a gut out wide; instead, his tireless work rate has been put to better use through the centre behind a striker. Now when Newcastle hit opponents on the counter, the Paraguayan international typically has an option alongside him in Joelinton or Allan Saint-Maximin, and he has not been forced to take the opposition on alone, resulting in him scoring two in as many matches.

His delightful floated effort guided into the top left corner against Bournemouth was made possible by being in a central area behind the Cherries’ defence, then capitalising on Eddie Howe’s side giving him time and space to shoot.

Another benefactor of the switch to a more attack-minded setup has been Allan Saint-Maximin. He too has prospered from not being isolated in the opposition final third, demonstrated by quadrupling his assist tally for the season against the Cherries. Sean Longstaff was picked out from a host of Newcastle bodies queuing up to get on the end of the Frenchman’s cross, earlier on in the campaign the 23-year-old would have been fortunate if he had Joelinton for company when Bruce selected five defenders.

As for the strikers, the Magpies’ record signing did finally break his drought in the win over Sheffield United, even without fans at St James’ Park the sigh of relief on Tyneside would have been almost audible. Dwight Gayle followed suit with a clinical finish against Howe’s side, having spurned a near open goal against Manchester City, which the less said about, the better.

Newcastle have still conceded an average of a goal per game since the restart, and Bruce still has defensive frailties to ponder. However, the reprieve that this side has finally become free-scoring may mask any worries, at least until the end of the season.