Transfer Opinion: Why Newcastle must add £18m-rated young British talent to the ranks 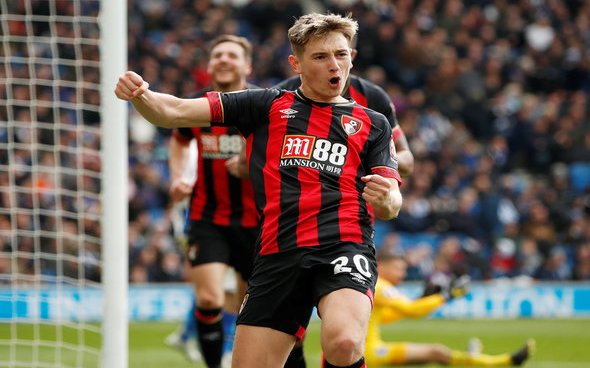 A queue of Premier League clubs are lining up to snatch the best talent relegated to the Championship this season, and one such player is A.F.C Bournemouth’s, David Brooks. The Welshman was unfortunate to miss much of this campaign after an outstanding debut Premier League season with the Cherries, and his loss was a real blow to Eddie Howe’s side.

Although, Bournemouth’s loss could be Newcastle’s gain as the Magpies are reportedly interested in a move for the 23-year-old. The Magpies will have to act fast as a host of other suitors, including Leicester City, West Ham and Crystal Palace are also reportedly lining up moves for the Cherries ace.

During his first season in the top-flight, Brooks was sensational, scoring seven goals, over double what he had managed in the second tier the previous season, three. Those seven strikes made him the Cherries’ third-highest scorer behind only Callum Wilson, 14, who has also been linked with a move to St James’ Park, and Joshua King, 12.

But the attacking midfielder did not just display tremendous talent Infront of goal. Brooks suggested he was the complete package by providing five assists, which was again the third-highest contribution of any Bournemouth player, behind Wilson, nine, and Ryan Fraser, 14.

Sadly, this term Brook’s development was stopped in its tracks by an ankle injury which required surgery and caused him to miss 33 matches of the campaign. The 23-year-old appeared just twice before the Premier League’s hiatus and seven times after as Howe’s side ultimately failed in their battle for survival in the division.

Brook’s performances after the restart were not of the level he had displayed the previous season, though he did score one goal against Manchester City. Likely, the Cherries’ precarious position in the table and the pressure that comes along with a relegation scrap could have affected Brooks. Furthermore, he was returning from a 324-day injury lay off,  would probably explain why he was not at his best.

Providing Brook’s ankle does not pose any problems, as he had also missed five matches the previous season due to an ankle issue, Newcastle should move fast for the Welsh international. He is valued at £18m (Transfermarkt), but given Bournemouth’s relegation they will not have much room to negotiate, and he could be a steal for Steve Bruce.