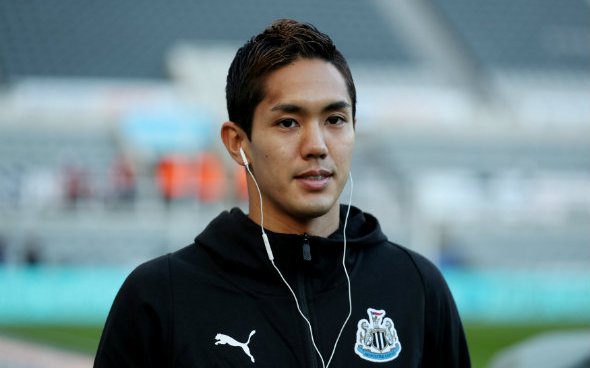 You know your time could well be up when three strikers, one of whom has chronic injury issues and is yet to score, are ahead of you in the pecking order.

That is the dilemma currently facing Yoshinori Muto. The Japanese forward made a rare cameo on Wednesday evening, adding seven minutes to his total of 208 in the Premier League this season, while possibly reminding some Newcastle fans of his existence in the squad.

It was the Japanese international’s first appearance since January, and he has utterly fallen out of favour under Steve Bruce, with two-goal Joelinton accumulating over 12 times the number of Premier League minutes this term. Even with Andy Carroll’s relentless injury absences, which have caused him to miss more than 95 days of action and Dwight Gayle only making his first start on Boxing Day, Muto was still overlooked.

Worse yet for the 27-year-old, both Gayle and Carroll have begun to find form since the restart, with the former opening his account, scoring twice, while the England international has become the Toon’s leading assist provider with four. Muto cannot catch a break in the northeast, and it is easy to see why with the striker taking on a pitiful 0.1 shots per match this season. Even on the rare occasions where the former Mainz striker has started, Muto’s failed to exert any notable influence on proceedings.

Bruce has promised to rotate his side, meaning Muto could be offered an opportunity to show what he is capable of in the last four Premier League matches. However, having scored once in his 25 Premier League appearances, without providing a single assist, highlights just how ineffective he has been since arriving from the Bundesliga.

With Carroll, Joelinton and Gayle, who Newcastle reportedly considered selling in January, all in starting contention ahead of Muto, his route back into the Magpies’ starting eleven appears to have reached an impasse.

When he does feature, no one can fault his determination to recapture possession, or his reliability on the ball, with an 84.4 per cent pass accuracy, but a striker who does not score nor assist is of little use to any top-flight side. His record in Germany, with 30 goal contributions in 66 matches suggest he could be of use to a top tier side, but he has failed to replicate those numbers with the Toon.

Unless drastic change happens, and rapidly, time is ticking away for Muto’s Newcastle career.