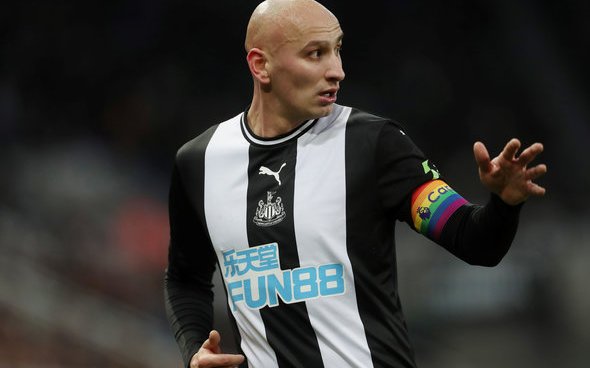 Having collected two points in the final five matches before the Premier League season was halted due to the Covid19 pandemic, few would have expected Newcastle United to return in such blistering form.

The Magpies are yet to lose in their first five matches back, racking up 11 points and eyeing up a top-half finish, having secured survival with five games of the campaign remaining.

Though he is often a player who splits opinion amongst the Newcastle faithful due to his languid style of play, Jonjo Shelvey’s shackles have been released with Steve Bruce switching to a more attacking formation, and his incredible vision and passing range have left some fans purring.

Newcastle United’s official twitter account posted a compilation of some exquisite touches and deft passes the playmaker has contributed since football returned and the footage has left some members of the Toon Army salivating.

One fan had suggested that it is not only his vision that makes Shelvey such a threat but also his ability to play the pass few others can see, which is shown by completing 1.8 key passes per match, the highest of any Newcastle player.

That right peg could find a needle in a haystack. Hes been outrageous recently

Others also commented on his upturn in form which has seen the playmaker both score and assists in his last two matches, extending his lead as the Magpies’ top scorer on six strikes for the season, as per WhoScored.

He’s been playing at an unreal level. Pleasure watching his game

His fitness and commitment have often been a stick people use to beat the Englishman with, though Bruce has tried in the past to explain how people have the wrong perception of Shelvey, it seems the Newcastle fans remain divided with some commending his stamina and motivation. In contrast, others suggest he has wained late on in matches.

Not only that, he seems fitter and more committed, which is great for the team

Playing so well at the moment, very under rated generally. He should work on stamina as I feel he tires later on in games and you don’t see him dominate the ball as much.

However, there are a select few supporters who the midfield maestro is yet to convince, many of whom cite consistency as the primary weakness in the former Liverpool and Swansea midfielders’ game.

1 good game in 10. Used to rate him when we first signed him. Undoubtedly got plenty of ability but he rarely seems to fancy it imo.

For others though playing alongside the industrious Isaac Hayden, who is generally the antithesis of Shelvey either winning the ball back or quickly shutting the opposition down to relinquish opposing players of time and space, evidenced by his average of two tackles per match, makes the pair an ideal partnership.

Regardless of your opinion on Shelvey, it’s difficult to argue that with his outstanding long-range passing, of which no other outfield player completes more, 5.6 per match, he brings some unique attributes to the Newcastle United squad.