Pundit View: Bruce on prospect he’s hoping will “still be a Newcastle player when I come back” 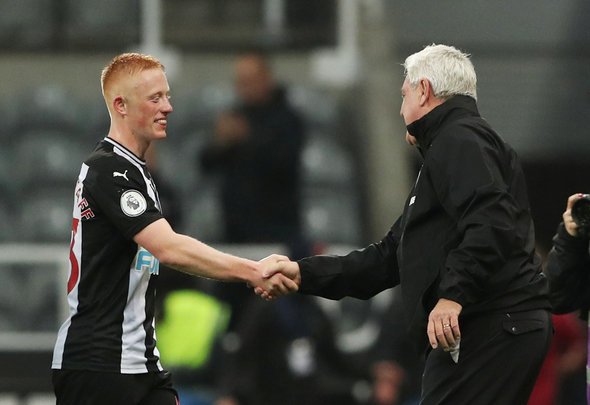 The Premier League season may have finally come to its conclusion, but on Tyneside, there are still a myriad of issues swirling around. The takeover is a constant talking point, which it has been suggested could rumble on through to next season, with Mike Ashley planning to begin the term in charge.

Meanwhile, another bone of contention at St James’ Park is academy graduate Matty Longstaff’s contract dilemma, which has all but expired after the 3-1 defeat to Liverpool on Sunday. Four days remain on the extension he signed due to the Premier League’s hiatus, but the signs are not looking positive that he will stay beyond that.

After the final match of the season, Bruce revealed why he had not been selecting the midfielder regularly since the resumption and his hopes that the 20-year-old will be back in his squad for the start of next term.

Speaking to the Shields Gazette, Bruce said: “I hope he stays one way or the other, whether there’s a takeover or not. I don’t think the takeover’s going to influence that.”

The Newcastle boss also revealed why Longstaff hadn’t featured frequently since the restart, saying: “Matty hurt his thigh. He’s had problems with that since he came back, so I was never going to risk him. Thankfully his brother [Sean] was OK, but I don’t think Matty Longstaff’s situation will depend on whether there’s going to be a takeover or not. I’m still hoping he’ll still be a Newcastle player when I come back.”

Longstaff has been embroiled in a contract saga for much of the latter half of the season, despite only making his Premier League debut for the Toon against Manchester United in October. His stunning winner against the Red Devils made the shortlist for the division’s Goal of the Season, but that may be the high point of his career on Tyneside as contract negotiations appear to have reached an impasse.

Bruce has claimed the club have made the academy graduate a “fantastic” offer, but it has been made public that Udinese offered the midfielder a £30k a week deal and Serie A could be the destination for Longstaff next term. There have been no suggestions from the club or Bruce that negotiations are progressing and if Longstaff does not accept the final contract offer, he will be free to depart.

While the Magpies manager may wish for Longstaff to be back with him next season, there is currently no evidence to suggest the 20-year-old is any closer to signing the deal which has been on the table for over a month.