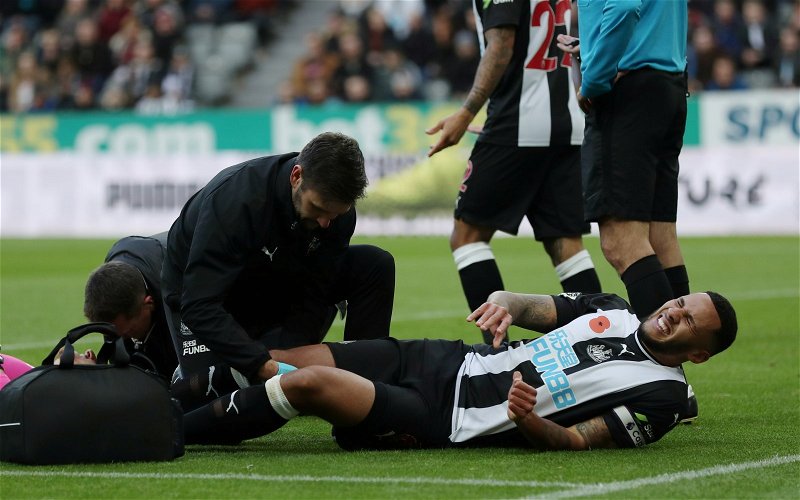 After suffering yet more injury woe against Wolverhampton Wanderers on Saturday, some light at the end of the tunnel has emerged for Newcastle United ahead of tomorrow’s clash with Rochdale. Indeed, after watching both Paul Dummett and Dwight Gayle limp off at Molineux, manager Steve Bruce could welcome back skipper Jamaal Lascelles for the game at St. James’ Park.

As per the Shields Gazette, the Toon captain is pencilled in to return for the FA Cup third-round replay after returning to training out in Dubai recently, having missed the last 10 games (53 days) with a cracked tibia. Furthermore, teammate Matt Ritchie – who has reportedly (via the Chronicle) agreed a new contract in principle – is also understood to be in line to start as he steps his recovery from a long-term ailment.

How big is this for Newcastle?

Pretty big, to be honest.

While Bruce’s backline is well-stocked on paper when you consider the likes of Isaac Hayden, Emil Krafth and Florian Lejeune have supplemented the likes of Fabian Schar, Ciaran Clark and Federico Fernandez this season, Lascelles is clearly an important figure.

Since his injury against Bournemouth, the Magpies have kept just two clean sheets in his absence and the former Nottingham Forest man was racking up some impressive numbers prior to his injury. In fact, only one player (Fabian Schar) makes more blocks per game than him (1.1 to 0.9, via WhoScored) while only two players make more clearances over the same period in the shape of Fernandez and Clark.

Given Dummett’s injury and the fact Lejeune has made mistakes since returning from his long-term lay-off (the Frenchman was at fault for at least one of the goals against Leicester City on New Year’s Day), Lascelles’ return can only be seen as a good thing.

He, along with Ritchie, have been huge parts of the team for a number of years on their journey from the Championship to the Premier League and having two players of such experience available for a difficult cup tie, with the Dale having taken Manchester United to a penalty shootout at Old Trafford this season, could be vital.

Should Lascelles go straight back into the side? Join the discussion by commenting below…