Allan Saint-Maximin return: Newcastle handed boost ahead of Wolves but must be careful 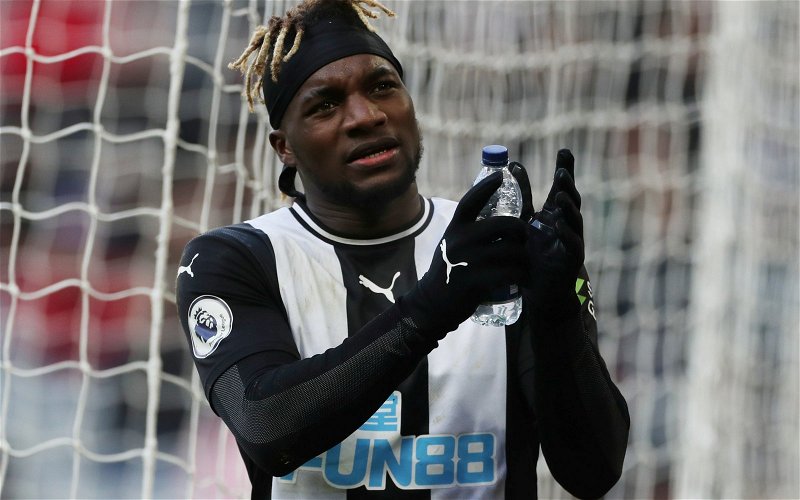 While life at Newcastle United looks fairly miserable right now after a run of poor results over the festive period culminated with a disappointing draw with Rochdale in the FA Cup on Saturday, some good news may well be on the horizon according to the Chronicle.

That’s because, as per their recent report, Allan Saint-Maximin could be in line to return to the squad for their trip to Wolves on Saturday afternoon. Indeed, the influential Frenchman has been missing since picking up a hamstring injury against Southampton in early December.

Quoting manager Steve Bruce, the outlet suggest that the former Nice man could be joined by the likes of Ciaran Clark and Paul Dummett in easing the club’s recent injury crisis, which is obviously a boost. During the game away at Spotland, Emil Krafth and Isaac Hayden were forced into fairly unfamiliar roles alongside Federico Fernandez in a back-three, with neither of those players handed above a 6/10 in the newspaper’s player ratings for the FA Cup clash.

“I hope Clark, Dummett, Saint-Maximin –  Jesus, any more? – I am hoping that four or five are back,” said Bruce.

The return of Saint-Maximin

While having players back in general is a boost, the return of Saint-Maximin is particularly important. Since losing his services on the 8th of December, the Magpies have been able to win just once and have scored just three times in six games across all competitions.

Now, the Frenchman is barely a prolific goalscorer himself but does offer an obvious threat going forward. As per WhoScored, his 4.5 dribbles on average per league game are only bettered by two players in England (Adama Traore and Wilfried Zaha) and his 1.5 shots over the same period sees him rank joint-third in that metric within the squad.

Why it’s bad for Wolves

It’s hard to argue against Wolves being a very good side. They sit seventh in the league while balancing European commitments, though do seem to have a weakness when facing sides below them, losing to Huddersfield twice last season as well as Cardiff. Indeed, their most recent loss came against struggling (albeit somewhat resurgent) Watford, with the Express and Star noting how defender Ryan Benett looked ‘static’ against quick wingers such as Ismaila Sarr and Gerard Deulofeu, so perhaps someone as direct as Saint-Maximin can take hope from that.

So, given their problems at Vicarage Road before the turn of the year, a player with the tools Saint-Maximin has does look to be someone who can hurt Wolves. Still, he has just had a hamstring layoff so rushing him back before what look like fairly winnable games against the Dale, Everton and Norwich City between now and the start of next month may not be the wisest idea.

After all, when he went down against Tottenham back in August with a similar problem, he missed almost a month of action, so caution should be advised but, if he is used, he does have the tools to hurt Wolves it seems.

Would you risk him against Wolves on Saturday? Join the discussion by commenting below…