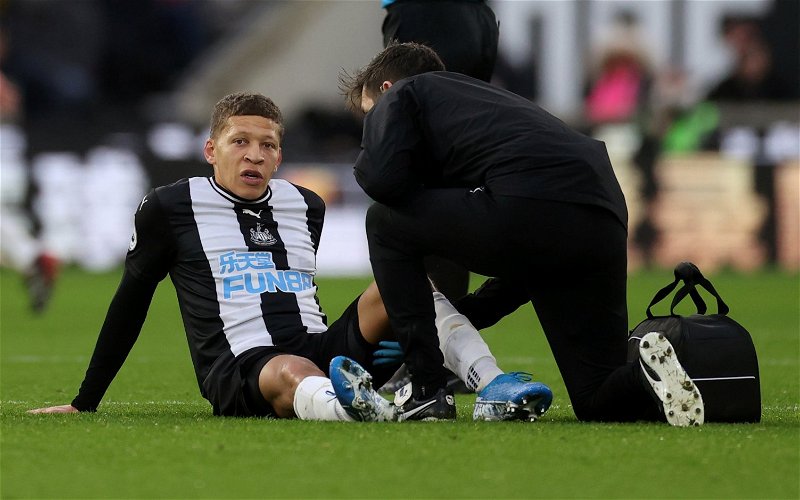 Earlier this month, Newcastle United manager Steve Bruce described the club’s injury crisis as ‘crazy’ and, once again, this afternoon saw the problem take another turn for the worse as both Dwight Gayle and Paul Dummett limped off in the first-half against Wolves.

During the frantic festive schedule, Liverpool boss Jurgen Klopp expressed his sympathy for the Toon Army after their loss at home to Leicester City on New Year’s Day but, after the crisis reared its ugly head again away at Molineux, many fans on social media turned their attention from what could be perceived as bad luck towards Bruce.

As per the Chronicle, the Magpies have suffered SIX soft-tissue injuries in just 120 minutes of action, while there were also suggestions from the likes of Chris Waugh that Joelinton had a groin problem of his own in the first-half before he was eventually taken off after the break.

With that in mind, here’s a look at how many Newcastle United fans blamed Bruce and his training methods (though there is no concrete evidence behind this yet, it must be said) for the problems.

Bruce and his staff can look as exasperated as they want with regards to this injury crises. However, they are to blame for today. Both players rushed back. Shocking management.

What does Bruce have the players doing at the training ground man?! A reoccurring joke the amount of injuries his players suffer #NUFC pic.twitter.com/L7DKo0DCHJ

It’s actually a joke now. Soon enough we’ll be forced into playing our under 23’s. It’s not unlucky, every other team has the same schedule, it’s entirely down to Bruce’s load management

Something needs to be looked at here…

Cabbage's training is all wrong . Rabbit away somewhere

At what point does Bruce accept that the endless injuries he has had at every club is actually down to his training?

This many injuries is not normal, but neither is it simply "bad luck" or "unfortunate". The media have to start asking Bruce questions about their approach to player conditioning and fitness management. We didn't see anything like this last season under Rafa's staff

Steve Bruce always has teams that injure like this, no coincidence

Who is to blame for Newcastle’s injury crisis? Join the discussion by commenting below…