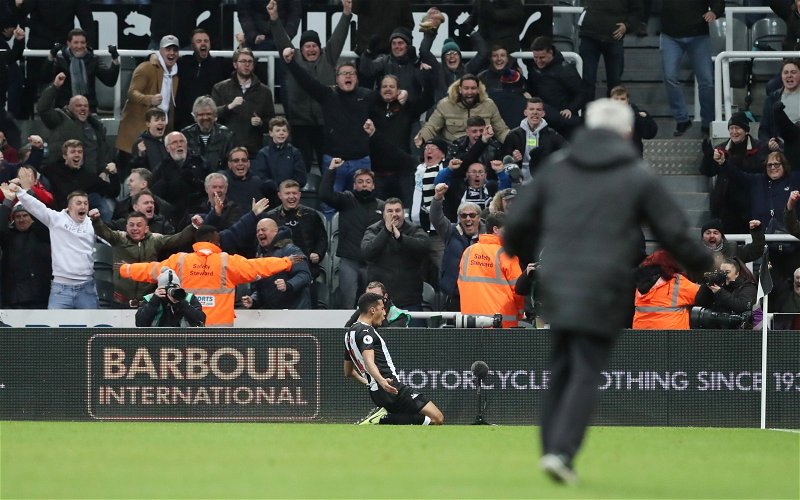 Newcastle United’s dramatic win over Chelsea this weekend appears to have split the opinion of a number of fans on social media. While Isaac Hayden managed to secure three points for the Toon Army to send fans home happy, it was a fairly miserable game at St. James’ Park up until then.

Now, it’s hard to argue against Steve Bruce’s tactics. There was an obvious gameplan – as there was so often during Rafa Benitez’s time in charge of the club – and it ultimately worked but notable voices within the Newcastle community such as George Caulkin and Mark Douglas spoke of their lack of enjoyment in watching the team play.

As per WhoScored, the Magpies have the lowest possession of any of the 20 teams in the division (just 38.8%) and (per the Premier League’s official website) have made the fewest passes (7,093), as well as taking the second-fewest shots (223, only five more than last-placed Crystal Palace), so it’s clear to see that there are problems when it comes to taking the game to their opposition.

With that in mind and following the dramatic win, the Chronicle’s Lee Ryder asked his followers whether or not fans should care about whether the Toon win ugly or not, prompting quite the reaction online. With that in mind, here’s a look at some of it.

The thing is, if ‘winning ugly’ still means a scrap at the foot of the league, yes, it matters a lot. The club isn’t ‘winning ugly’ enough to justify putting up with it.

One win doesn’t change that. If we’re going to scrap for mediocrity then at try it in some sort of style.

Happy with the wins and winning mentality. Lads seem to always have belief. A tad worried in the long run that we can hold up as we aren’t getting many chances.

I do, sad times. Great team work ethic, however the football is horrendous.

As long as no one pays to watch the games it’s fine, 50,000 Free Ticket Fans next season.

For years we lost games we should have won because we couldn't defend. In the last 3 seasons defence has been our strength. I'd love us to be entertaining, but I love it even more when we win, however we do it.

Do you care about Newcastle’s style of play if they win? Join the discussion by commenting below…