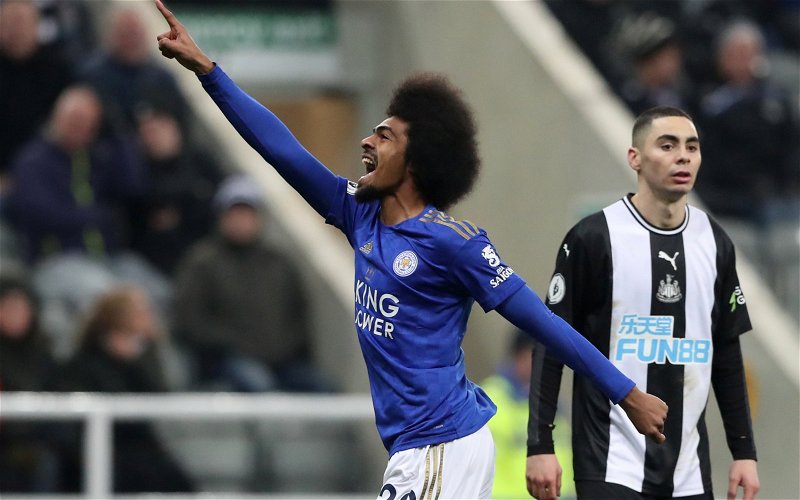 Amid the celebrations of this weekend’s dramatic win over Chelsea, you could have perhaps been forgiven in forgetting the fact that it’s the January transfer window and a month that Newcastle United are yet to strengthen in.

So far this month, there does to be a clear idea of what the Magpies are looking for this month, despite the fact they’re yet to get anything over the line. Indeed, attacking reinforcement looks to be the flavour on the month on Tyneside, with the likes of Olivier Giroud, Emmanuel Dennis, Valentino Lazaro, Jarrod Bowen and Ademola Lookman all linked with a move to St. James’ Park.

However, the Sunday People (via HITC) recently reported that the Toon were keen on bolstering their options deeper in midfield, throwing up a controversial name. According to their report, Leicester City midfielder Hamza Choudhury is of interest ahead of a potential loan swoop, just months after the youngster tackled Matt Ritchie in a Carabao Cup clash, ruling the Newcastle star out for months.

The challenge infuriated Steve Bruce at the time, prompting him to suggest the tackle might well have ended Ritchie’s career had he left leg where it was.

”If his leg had been planted on the floor, he was in serious trouble. He rode it a little bit but it was a horror challenge.”

So, given his very recent history with an influential Newcastle player and the fact he scored against them on New Year’s Day, the rumour was always likely to spark somewhat of a reaction. With that in mind, here’s a look at some of it online.

Imagine him and Ritchie in training. Oof

No thanks, he's a liability.

Just to let Ritchie snap him in the first training session, then send him back to Leicester.

Matt Richie would be thrilled

Richie would chin him