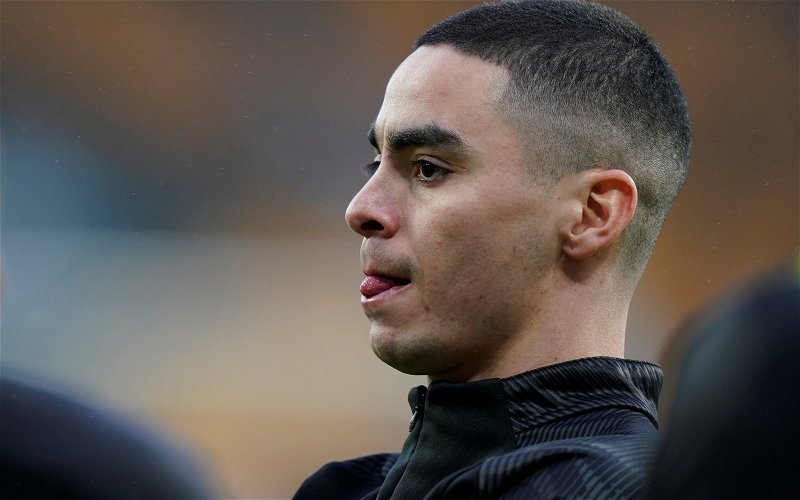 During Miguel Almiron’s infamous barren run as a Newcastle United player from January 2019 until December of that year, the Paraguayan was on the end of some criticism for his lack of end product. Now, while he was the club-record signing and did miss a number of big chances, perhaps some of the flack coming his way was a touch unfair.

The former Atlanta United man was getting used to life in the Premier League, playing for a side who lost their influential manager and didn’t carry much of a threat in attack generally. Indeed, teammates Allan Saint-Maximin and Joelinton aren’t exactly in the form of their lives and that’s without the season-ending injury he suffered against Southampton back in April.

So, the fact he’s now bagged three goals in three across all competitions is an obvious boost for everyone involved at the club. In fact, now he’s adding goals to his game, the £21m signing Rafa Benitez pushed for before he left St. James’ Park is actually starting to look like a bit of a bargain across a number of positions.

During yesterday’s draw with Wolves, the 25-year-old recovered the ball 11 times, dispossessing the electric Adama Traore along the way. That stat, along with his two interceptions show just how much work he’s putting in defensively, as well as now finding the back of the net. Couple those with his assist against Manchester City in late 2019, Almiron is beginning to look like an absolute all-rounder.

Outstanding from front to back. pic.twitter.com/D3Q5cVtjPu

In fact, even during what was an otherwise miserable day away at Rochdale, the South American looked like one of few bright spots. Now, perhaps you’d expect a footballer of such a fee to standout against League One opposition but Joelinton, for example, failed to show up despite costing nearly twice as much. Not only that, but his willingness to drive from central midfield (as was evident in the goal he scored) was arguably the sign of a man not scared about a potential banana skin amid what was a terrible run of form. Clearly, he’s not afraid to get on the ball to try to make things happen, whether it be on the wing or more centrally, with Transfermarkt noting he’s operated in both berths this season.

That, in itself, brings with it an interesting question. Could Almiron slot into midfield should someone such as the linked Ademola Lookman come in over the course of the January window, while the team keeps its shape? Looking at the statistics, it certainly is a possibility.

Chris Waugh recently pointed out that the Magpies lack a physical threat to drive from deep so perhaps Almiron could fill that role in a way similar to Angel di Maria during Real Madrid’s 2014 run to winning the Champions League. Carlo Ancelotti infamously dropped the Argentine back into a midfield three alongside Toni Kroos and Luka Modric to accommodate the arrival of Gareth Bale to devastating effect, with the Argentine – according to Goal at the time – rescuing his career in the Spanish capital (for that season anyway) as a result.

Now, it would be fanciful to suggest this current Newcastle squad is anywhere near the level of the Real side boasting the likes of the names already mentioned plus Cristiano Ronaldo, Karim Benzema and Marcelo but there are certainly similarities between di Maria and Almiron. Magpies legend Nolberto Solano compared the two, after all, and doing the same to the stats between the Toon man and di Maria during that final season in the Spanish capital makes for compelling reading.

Right now, Almiron is averaging more tackles per game (1.8 to 1.6, all stats via WhoScored), more interceptions (1 to o.6) and more clearances (0.5 to 0.1) than di Maria did that season. Obviously, Los Blancos do tend to have more of the ball than Newcastle so perhaps the defensive duties aren’t as great but even the attacking stats make for pleasant reading. An average of 1.8 shots per game sees them equal, while the same can be said about dribbles per game (1.4) and Almiron actually wins more fouls (1.6 to 0.9) than di Maria did. The current PSG star did average far more key passes per game (2.6 to 0.6) but he was an established elite footballer feeding one of the fiercest attacks in European history (one who won four Champions League titles in five years) so there are mitigating factors as to the difference there.

So, in summary, it does appear that there is the option of dropping Almiron into midfield to perform a similar job to di Maria should the Magpies move for someone such as Lookman, who also tends to operate wide of a striker.

Either way, no matter what position he plays, given his work-rate already, the potential to move him around the park and the fact he’s now in the goals, £21m is starting to look like a bit of a bargain.

Do you think Almiron could play in central midfield? Join the discussion by commenting below…