The journey to Bramall Lane has become a daunting one with Chris Wilder in charge in recent years, but after Saturday’s 2-2 draw with Manchester City, Bruce will be feeling confident.

Despite that positive result at St James’ Park, Bruce would do well to drop out Paul Dummett and Joelinton for the Blades clash, with Fabian Schar and Dwight Gayle replacing them.

Those should be the only two alterations the Magpies boss makes for the game, and it would likely be enough for his team to outdo the newly-promoted side.

There can’t be any change between the sticks, though. Martin Dubravka was excellent once again against the champions, and so he must keep his place here.

The same goes for Javier Manquillo, who defied his critics with a tremendous performance at right wing-back on Saturday. The Spaniard has to start, with Jetro Willems retaining his spot on the opposite side of the defence.

While Dummett hasn’t been particularly poor, Bruce simply has to get Schar back into the team now he’s fully fit. The Swiss star must link up with Federico Fernandez and Ciaran Clark in the centre of the backline.

Isaac Hayden and Jonjo Shelvey were both terrific against Pep Guardiola’s side, and so both men will almost certainly keep their places in the middle of the park on Thursday.

Miguel Almiron and Allan Saint-Maximin are rounding into form nicely, and so they should both start against the Blades. Meanwhile, Gayle deserves a chance after having played just 43 minutes so far this season [Source: Transfermarkt]. Joelinton hasn’t been scoring, whereas Gayle knows where the back of the net is. Bruce must give him an opportunity. 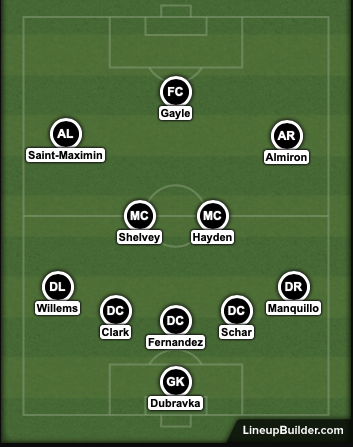