Newcastle United head coach Steve Bruce would be wise to make four changes to his Magpies team to face Burnley on Saturday afternoon.

The Toon boss is having to deal with a few different injury problems, with Allan Saint-Maximin out for a month and Ciaran Clark set to miss the Turf Moor clash as well.

Meanwhile, Jonjo Shelvey and Miguel Almiron are thought to be doubts, meaning that a raft of switches may occur. Sean Longstaff and Andy Carroll should certainly replace those two.

Meanwhile, Fabian Schar and Christian Atsu must replace Clark and Saint-Maximin, with those four alterations potentially being enough to see Newcastle bash the Clarets.

There’s no doubt that Martin Dubravka should start between the sticks once again. The Slovakian international is having another terrific season and is arguably the first name on the team sheet for Bruce.

Javier Manquillo has proved himself the most reliable right wing back at the club in recent weeks and should start once more. Meanwhile, the same can be said for Jetro Willems on the opposite side of the defence.

Schar is fully fit and must come in for the sidelined Clark. The Switzerland superstar will almost certainly partner Federico Fernandez and Paul Dummett at the heart of the defence.

As mentioned, Shelvey is a doubt and so the elder Longstaff is an obvious candidate to replace him. Isaac Hayden has to line up alongside the youngster in the middle of the park.

With Almiron and Saint-Maximin both potentially missing out, Joelinton should revert to the wing role he had at Hoffenheim. That would allow Carroll to play through the middle and Atsu to take up residence on the left wing. 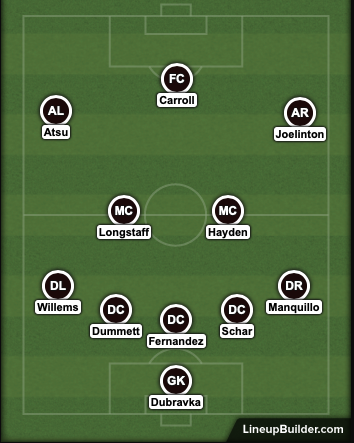